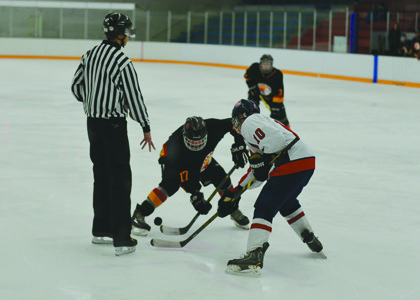 The squad hopes to continue its forward momentum from a solid tournament late last month in Lethbridge.

“The other pool was tighter than our pool. They had a nice hockey team,” said Cam Cleland, head coach of the Taber peewee “AA” Golden Suns who would eventually lose the game in double overtime 6-5 after skating 4-on-4 and 3-on-3 in overtime. “And they went on to win the championship easily 9-2.”

The peewee Golden Suns had raced out to a 4-1 lead in the first period before St. Albert eventually pulled even 5-5 to put the game into overtime.

“Typically guys try and send their better skaters on the 3-on-3. I think we had better scoring chances on the 4-on-4 and the 3-on-3. I’d say we doubled the chances,” said Cleland. “The puck just wouldn’t bounce for us that morning. But it was a good growing game for sure.”

This past weekend saw a half dozen Golden Suns players try out for the zone Winter Games team as the entire peewee SCAHL division had the weekend off.

“Things are going good. The expectations I gave this team at the beginning of the year, we definitely have met that goal at this point in the year, and probably exceeded it a little bit,” said Cleland. “The team seems to be getting a little bit better in general each week and each month. We are going in the right direction. We’ve played the first-place team in each (south-north) division close and we lost a real tight one against the top north division team where they scored the winner with .2 seconds left on a bad bounce. We are capable of playing on the top end and the middle is very, very tight. There is basically not a night you can take a game off. The whole league is tight where anyone can beat anyone on any given day.”

BANTAM: Taber bantam “AA” Golden Suns (12-5-1) split its pair of South Central Alberta Hockey League games over the weekend, starting off with a 5-3 loss to Cranbrook Hornets (9-5-2) at the Taber Arena on Friday night.

The team was able to bounce back with a 6-3 doubling of Central Selects (9-2-3) at home on Saturday.

Taber bantam “AA” Golden Suns do not return to SCAHL action until Dec. 12, with a game against Bow Valley Timberwolves at 4:30 p.m. at the Vauxhall Recreation Centre. The team then hits the road on Dec. 13 against Wheatland Warriors.

MIDGET: Taber midget “AA” Golden Suns were blanked 3-0 by the Lethbridge Hurricanes in SCAHL play at the Taber Arena on Sunday. Broc Merkl took the loss in net, facing 31 shots on net.