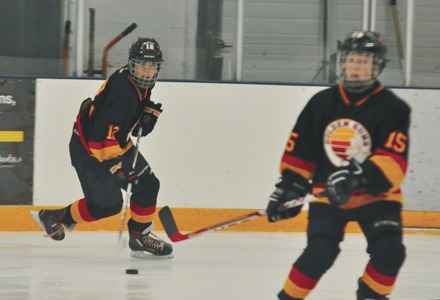 The first game was a 4-3 win by the Suns on the road on Friday night.

Golden Suns were then doubled up 6-3 by the Hurricanes on Sunday at home.

Taber peewee “AA” Golden Suns travel to battle the Foothills Bisons on Friday, before returning home on Sunday to play Okotoks Oilers Green at 1 p.m. at the Taber Arena.

The first was an 11-2 win against West Central Tigers (3-4-1) on the road on Halloween night, which featured the treat of scoring three of their goals short handed. Mason Sande had four goals and an assist in the win. Derrien Tonin and James Halverson both had two goals apiece. Quade Hughson, Kole Fujita and Seth McCulloch had singles. McCulloch and Tristan Miller each had two assists apiece. Kolby James, Fujita, Halverson, Hughson, Darian Virostek, Brandon Hauck, Hayden Mack and Ryden Remple had single helpers.
Goaltending duties were split with Brayden Peters earning the win, facing 18 shots. Owen Meyer came on in relief and faced 11 shots.

MIDGET: Taber midget “AA” Golden Suns (5-5) won both of its SCAHL games, starting off with a big 7-1 win over Airdrie Lightning (3-5-1) at the Taber Arena on Friday night.

The team then managed a 5-2 victory over Medicine Hat Hounds (3-3) on the road on Sunday.