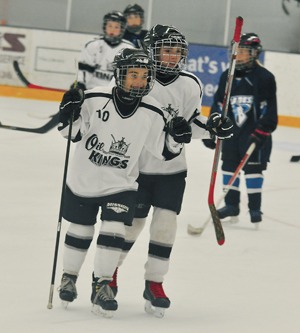 Samuel Tolsma, and Lincoln Weiss each had four goals a piece and Tage Jensen and Langdyn Cummins each had hat tricks. Avery Remfert and Ryan Grey had singles.

Taber Novice 1 Oil Kings moved its record to 3-0-1 with a 17-4 win over Foremost Flyers at the Taber Arena on Saturday.

Damian Beskwick, and Nathan Planger each had four goals a piece. Kayden Kress and Chase Stronge each had hat tricks. Tate Nakashima, Tanner Fletcher and Blake Rabusic all had singles.

PEEWEE: Taber Peewee Oil Kings earned a 10-1 win over Brooks on Sunday on the road.

Earlier, the team dropped a 7-4 decision to Fort Macleod Mavericks on the road on Saturday. Span had a goal and an assist. Hendricks, Kress and Michael Stronge had singles. Wright drew three assists and Murphy had two.

Taber Peewee Oil Kings move to 3-3 on the season.

Scoring for Taber was Kade Duell with two goals and one assist. Connor Eldridge, Walker Skiba and Matteo Blasseti each had singles. Matthew Gensorek had an assist.

Once again Kahil Wright was between the pipes and suffered his first regular season loss. The team is now 4-1.

INITIATION: Taber Initiation 2 Oil Kings edged Raymond 8-7 on the road on the weekend.

Lincoln Wiebe and Nixen Miller each had hatricks and Ethan Volk and Madix Miller notched singles.

Scoring for Taber was Raiden Koizumi, Heston Hansen, and Cruz Duell all with hat tricks. Nathan Gensorek scored a single.