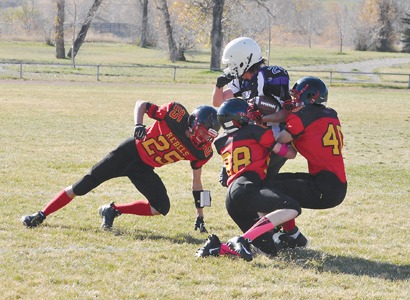 Trailing by ten points in the fourth quarter and facing a third-and-eight situation, things didn’t look good for the Taber bantam Rebels football team in its opening round of Southern Alberta Minor Football Association playoffs on the road.

A Cardston Cougars field goal put the home team up 23-13 early in the fourth quarter, and the Rebels were desperate for a spark. That spark came in the form of a long touchdown pass from Mike Sawatzky to Brett Andrus, which got Taber back to within three points. And from there, it was all Taber, as the Rebels tacked on two touchdowns to take a 34-23 win in Cardston.

“We really turned it on in the fourth quarter, and that big passing play really gave us the boost we needed,” said head coach Garrett Simmons. “We still had just over eight minutes left on the clock, so we did think about a punt but in the end, I wanted to give our playmakers a chance to make a big play.”

The Rebels came up with a big stop on defence as the Taber offence went to work again. Sawatzky capped off the next drive with a touchdown run to put the Rebels ahead, before Kadin Reynolds sealed the victory with an interception return for a touchdown.

“Those were two great plays,” said Simmons. “Mike made a couple of great moves on his touchdown run and Kadin, he’s been playing great pass defence all year. He read the play, stepped in front of the Cardston receiver and put the game away.”

Reynolds was also responsible for getting the Rebels on the board early in the first quarter. After he recovered a Cougars fumble on Cardston’s first drive, Reynolds scored the first touchdown of the afternoon on a 22-yard run to the endzone.

That promising start quickly toured sour. Taber once again had the ball deep in Cougars territory on the next drive, before a fumble and a Rebels’ penalty gave Cardston the ball back with good field position. The home team scored to tie the game and added another major to go up 13-6 at the half.

“We really came out flat in the second quarter and Cardston, to the team’s credit, battled hard and made life difficult for us,” said Simmons. “It’s tough going into Cardston and getting a win, and things weren’t going so well for us early on.”

Trailing 13-6, Andrus got the Rebels back on even footing with a 91-yard touchdown run, as Taber’s explosive offence, which leads the league in points scored so far this year, struck for a big play.

“I thought that play would really deflate Cardston and give us the edge going forward,” said Simmons. “Any time you give up a big play it’s hard to bounce back from, but Cardston pushed ahead and fought to re-take the lead.”

There was also plenty of fight left in the Rebels, as the team’s fourth-quarter comeback was reminiscent of the fourth quarter of last year’s Division III title game in Lethbridge, where Taber stormed back to win the championship with a last-minute rally over the Bulldogs.

That is a team the Rebels will not see in the playoffs in 2015, however, as Taber has advanced to the Tier I semifinal, while Cardston will now battle for the league Tier III title.

“All season we’ve looked for a challenge,” said Simmons. “We’ve played in a lot of lopsided games where we’ve simply dominated our opposition. Now we’ve beaten one Tier I team and we have to do it again this Saturday against Raymond.”