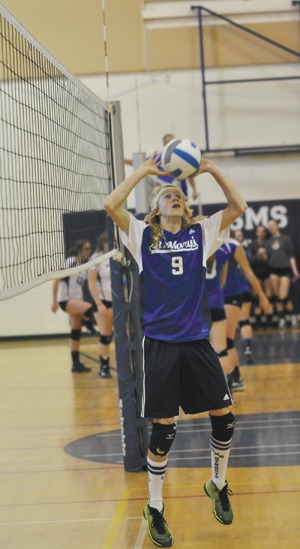 St. Mary’s Celtics boys volleyball team earned a third-place finish at its home Double Blue Volleyball Tournament over the weekend, as the team continues its march to 2A provincials.

The Celtics would fall in a semifinal to Senator Gershaw Gators from Bow Island, who would end up winning the tournament as a 1A powerhouse.

“They ended up molly whopping us in the first set 25-13. Our boys cut down on the unforced errors and bumped it to a 25-19 game (in the second set),” said Derry Kolody, head coach of the St. Mary’s Celtics boys varsity volleyball team.

The Celtics earned a 6-2 record in round-robin pool play which made for the tough crossover.

“Usually that gives you a pretty good chance to finish first in your pool but it didn’t. And it wasn’t the finish I wanted because it made for that tough crossover match,” said Kolody.

Three of the four teams that were in the semifinals of the Double Blue Volleyball Tournament were all from the Celtics’ pool which Kolody wanted to see how the team fared.

“We were the top (2A) team from all the finishers in the south. We wanted to match up against Immanuel Christian and we beat them where we won handily in one of the games,” said Kolody.

“It was a good test. Some of the coaches who have watched us play say we can be a contender.”

“We are a team that earns points and offensively we can earn points many different ways which is hard to do,” said Kolody. “We just have to cut down on our unforced errors which I’m sure a lot of other teams are in the same boat too.”