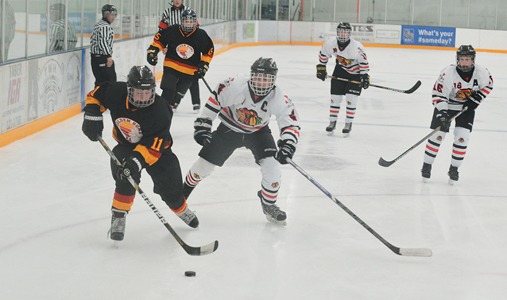 Taber peewee “AA” Golden Suns more than proved they belonged at a hockey tournament in Red Deer this past Thanksgiving weekend.

In bracket play, the Suns earned a 2-0-1 record, but garnered second in the pool with a point system by one point.

There the Taber Golden Suns dropped a tight 2-1 loss on Sunday against Penticton in the playoff crossover game.

“It was a very good game. It was by far the best challenge we had in the tournament, but the boys did well,” said Cam Cleland, head coach of the Taber peewee “AA” Golden Suns. “We had to make some adjustments based on their defence against us. The boys were able to make second and third-period adjustments and we tightened up the game really well by doing so.”

The Suns pulled its goalie with about 45 seconds left and was able to pepper the Penticton goalie with some quality scoring chances, but were unable to break through to tie the game late.

“We pressed really hard and got some chances down low. It was a good strong finish and all in all, we only lost the one game,” said Cleland. “In the first three games, we just stuck to rolling everyone out and we used everybody on the power play and some PK (penalty kill). In my mind and my assistant coach’s minds, we got what we wanted out of the weekend. Obviously, you want to get to the championship, but we got what we wanted out of the tournament to see what the kids can do in different situations. We grew and we realized some good things, and it will make us stronger.”

Taber peewee “AA” Golden Suns have a home-and-home series with Foothills from Nanton. Saturday, the Golden Suns travel to Foothills before Sunday’s home tilt against Foothills at 1 p.m. at the Taber Arena.

The first was a tight 4-3 loss to the Wheatland Warriors on Friday where special teams played a huge factor as four of the goals in the contest came via the power play or shorthanded.

Grady Honess, Mason Sande and Seth McCulloch tallied for the Suns. Kole Fujita drew two helpers with Brandon Hauck, Ryden Remple, Tristan Miller and Hayden Mack all getting single assists. Brayden Peters took the loss in net for the Suns, facing 31 shots on goal.
Taber bantam “AA” Golden Suns were able to bounce back in front of the fans at the Taber Arena on Saturday with a dominating 10-3 win over West Central Tigers.

Fujita, Sande and Kolby James each tallied two goals apiece in the win. Mack, Derrien Tonin, D.J. Tonin and McCulloch each had singles to round out the scoring.

Taber bantam “AA” Golden Suns are on the road this weekend with a Saturday contest against Okotoks Oilers and a Sunday game against Wheatland Warriors.

The first game was a 7-1 road win against Cranbrook Knights on Friday.
Brock Palmer exploded for five goals in the win. Linden Gouw scored the other two goals.

Taber midget “AA” Golden Suns returned home to the Taber Arena on Saturday and dropped a 6-2 decision to NWCAA Stamps.

Palmer and Middleton scored for the Suns. Middleton also drew an assist alongside Gouw.