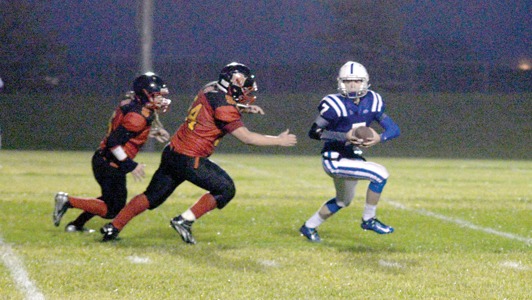 The W.R. Myers High School football team were soundly defeated on Friday night by Catholic Central High School in a soggy 42-0 outing on the gridiron.

“They laid a wollup on us. They’re a big school, so we expected a tough game in terms of opposition,” said Adam Hughes, head coach of the W.R. Myers Rebels football team. “Our goal going into it wasn’t winning, just toughening up and testing how our offence and our defence went against a tougher opponent.”

Hughes noted the team’s outing at Ken McDonald Memorial Sports Park on Friday was an opportunity to learn about strengths and weaknesses early on in the season.

“We had lots of positives coming out of it. We stayed healthy, we had no major injuries, and we had some players perform really well against a tougher opposition. CCH is one of the best teams in the province, they won a provincial title a few years ago, and they’ve been humming along ever since. It was a good chance to play against a bigger school, and a bigger team, and learn from it. When we set up a schedule — it’s a balancing act — but we always like to play a couple of tough teams. That’s why we put Catholic Central on there. We still had some players that played really well.”

Currently sitting with a 1-1 record in early season play, Hughes pointed out the 2015 team is a more balanced entity than in the past, but does lack some depth in key areas.

The Rebels need to step up their game on special teams if they hope to present a significant challenge on the field this season, according to Hughes.

“The thing that showed on Friday was our special teams. Our special teams turned it over three times, so they really hung our defence out to dry. The offence moved the ball well, we were able to run on their defence. Our defence made stops, it was just our specials that turned the ball over. So that’s the main focus of what we need to improve. That’s the thing about early season games against tough opponents, it makes it really clear what we need to work on.”

The team next travels to Calgary to play Canmore at McMahon Stadium on Saturday afternoon at 3 p.m.

“I started last year, and I’m trying to make it a yearly thing, because it’s neat for the boys to play in a stadium like that. Unfortunately, there’s lots of Stampeders fans on the team, so they enjoy kind of being there,” said Hughes, himself an Edmonton Eskimos fan.

The Rebels next home game will be against Winston Churchill on Sept. 18 at 7 p.m. at Ken McDonald Sports Park.