Rebels football ahead of the curve in concussion protocols for players 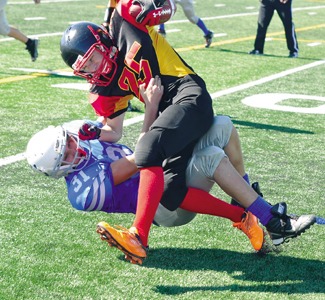 It looks like Taber football has been ahead of the curve when it comes to player safety.

The program is something the Taber bantam football team has already began implementing in since 2013 and will be implemented at the high school program as well.

The program is being looked at in the atom and peewee levels in being utilized.

“The testing has been around for awhile, but it’s just starting to get traction now. I just went searching for a better sideline test for concussions,” said Jason Jensen, the former defensive co-ordinator for the Taber bantam Rebels football team who will be taking over the defensive reins for the high school program this year.

“I stumbled across it on the Internet (back in 2013). The fact it was endorsed by the Sports Legacy Institute is what really caught my attention. That institute specifically studies the affects of head trauma on athletes. If they are on board with it, it has to be a good test. Hearing that announcement, I get a sense of satisfaction knowing we are on the right track. If the pros are going to do it and we’ve been doing it for two years, I know we are on the right track with the program.”

The King-Devick concussion test has three cards that have numbers on them that are spaced in different ways and patterns. You do a baseline time of how long it takes the player to read them off before the season starts. If a player takes a hard hit during the season and you suspect they may be suffering from a concussion, you pull them off the field to the side and in less than a minute, you can administer the test.

If the player is out by more than five seconds from their baseline time they had at the beginning of the season, a concussion has occurred likely.

The test has been around since the 1970s in which it was used to detect reading disabilities according to Jensen.

But in terms of using the testing for concussions, it has only been used extensively that way since 2009. The Mayo Clinic has publicly endorsed the King-Devick Concussion Test as well.

“The safety of kids playing sports is of the utmost importance to me. I want every kid that plays football in this town to have a positive experience. I don’t want kids to have headache problems after they have played football or anything like that,” said Jensen.

“The fact of the matter is, there is no such thing as a safe sport. You can have high concussion rates in rugby, soccer, basketball. You can have them in all the sports. It’s a matter of what can we do to mitigate it. Studies have shown it’s not usually the first concussion that’s the problem. It’s when the kid goes to return to play and suffers another concussion after that and then another one after that. With something like King-Devick, if we can pull them out when they suffer the initial injury, now we have really reduced their chance to have a real serious injury out of it.”

Continuing on with the further emphasis of safety in football are several programs adopting the Pete Carroll’s ‘Hawk Tackle’ technique. Carroll is the Seattle Seahawks’ fifth-year coach, and has been teaching the technique since his Southern California Trojans coaching days back in 2001. Hawk Tackling instructional videos have been sent to 14,000 high school football programs, and 8,000 youth football programs in the United States alone and is making inroads into Canada as well. The college national champion Ohio State Buckeyes adopted the tackling system in 2014.

“It’s something the high school team started to implement at the end of last year and through all of spring training. We’re running full speed on that across the high school and bantam levels this year,” said Jensen, of the leverage-based shoulder tackling method that goes away from previous tackling methods of players leading with their head. “There are people who are resistant to change on it. But the fact of the matter is, the Seattle Seahawks won a Super Bowl tackling with the method. The tackles still look great, it just gets the head out of the tackle. There’s that old school mentality of hitting with centre of mass and driving through the player. Where with the Hawk Tackling, you keep your head out of the way and you wrap and spin. It’s safer for both players in actuality and it’s proven to be effective on defence.”

“This is coming whether people like it or not,” said Jensen.