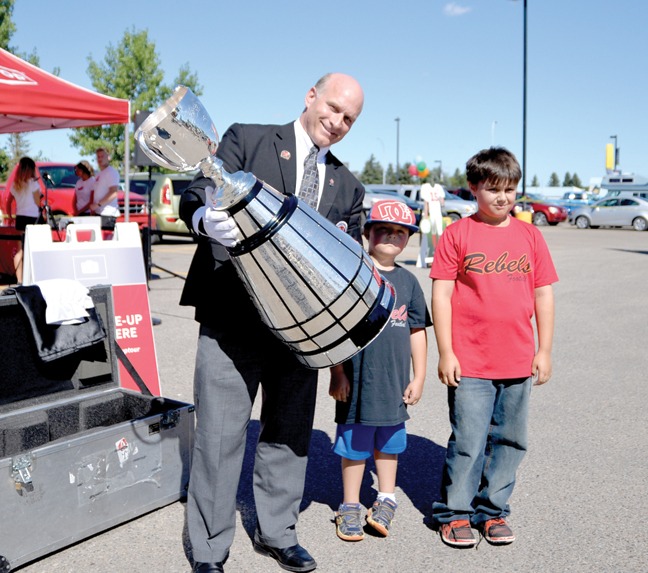 Alberta beef may have been on the menu, but last Friday, local residents had a chance to fill up their hearts and minds as the oldest trophy in professional sports – the Grey Cup – was the centerpiece of a special fundraiser in the Taber Co-op parking lot.

“There’s quite a passion here,” said Jeff McWhinney, one of the Keepers of the Cup.

“There’s a legacy, and it’s something that we need to carry on with this respect that we have for the Canadian Football League and the Grey Cup.”

McWhinney has been with the Canadian Football Hall of Fame since 2009, and is currently enjoying his first year on Grey Cup detail.

There are four Keepers who escort the Grey Cup around to its different events, and McWhinney handles most of the western Canada events.

This time around, the Grey Cup Tour started in Leduc, making numerous stops on its way to Lethbridge before veering east and heading out to Winnipeg.

But McWhinney isn’t the first “Keeper” in his family.

That honour goes to his father, Glenn “Keeper” McWhinney, who was part of the Edmonton Eskimos first Grey Cup win back in 1954 before his career was cut short due to a serious neck injury just a year after being named the Most Valuable Player for the Winnipeg Blue Bombers.

“My father was a great man,” McWhinney said.  The city of Winnipeg agrees; residents of that city can enjoy the green space available at Glenn McWhinney Park, named after Keeper for his legacy as an athlete and for his years of work in the community.

Being a part of that legacy has allowed McWhinney to be a part of something he loves.

“This is a pretty cool job,” he said. “It allows us to offer an awareness and education program to our youth, and the generations coming back.

“There are some great names on that cup, which allows us a great legacy,” he added. “Some of these guys on the cup have provided a lot of community outreach and charity programs.”

The tour is more than just a chance to get out and see the cup, however. In its own way, the tour honours the legacy of great CFL players through fundraising efforts.

The event included a “build your own burger” barbecue, photo booth for the Grey Cup, an event tent highlighting Alberta beef, some football-themed games, and music. The centerpiece is the Grey Cup, however, and after presenting the hallowed CFL trophy to those in attendance, a lineup quickly formed with eager fans waiting to get a photo.

McWhinney said it is important for business and the corporations that sponsor events of this kind to partner with the CFL, and it allows for the opportunity to bring out the Grey Cup and use it to raise money for various charities such as the Alberta Children’s Hospital.

“We’re very fortunate that we have people who want to take their time and donate, and we have a responsibility to our communities,” he said. “The Grey Cup is my responsibility.”

Hockey may be Canada’s national pastime, but there is nothing so uniquely Canadian in sports as CFL football.

Even the ill-fated “United States Experiment” of expansion to U.S. markets in the 1990s showed the CFL has that uniquely Canadian ability to be successful on home soil but unable to crack fickle American markets.

But McWhinney says it is exactly that sense of Canadian-ness that makes the league so appealing to Canadian fans.

“There’s 3,593 names on (the Grey Cup), from every ethnic background. It allows us to connect. We put everything aside once we’re off the gridiron. It’s fun, and on Grey Cup weekend, we allow everybody to wear their jersey and still play with each other, party with each other, and respect each other. And that’s what this has been about since 1909.”

McWhinney said many towns and cities across the country don’t have CFL teams, but that doesn’t mean they aren’t CFL communities.

“Every Canadian citizen has a right to be part of this Canadian fabric, this national Holy Grail. So these children who come out (in Taber) may not see it because they are not an Edmontonian or they don’t live in Calgary, but we still have an opportunity to provide that attachment to something like this. They deserve it, and the community deserves it. I look forward to seeing this kind of thing happening.”