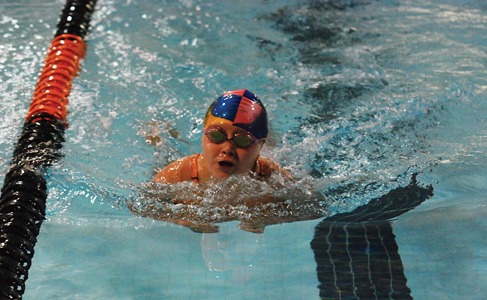 There were two swimmers from the Taber Viper Swim Club that earned aggregate medals at the Crowsnest Pass Piranhas meet over the weekend as the club comes down the home stretch to provincials.

Given the meet is one of the furthest away from Taber in the summer swim season, head coach Teri Cook added it is always a crapshoot to know how many swimmers will attend the meet.

“We had 13 swimmers. It’s really tough because it’s so far away. Sometimes we have a lot of kids. But that’s low compared to the average we usually have go to the meet,” said Cook.

Genna Wright also took a silver medal for her efforts in 15-to-17-year-old girls.

Beyond the aggregate medals were also swimmers tightening up their races and pushing themselves in various events.

“We only got two disqualifications in all our races in our kids’ swims, which is awesome. We only had two kids that didn’t get personal best times on swims. We had an insane number of best swims,” said Cook.

Taber Viper Swim Club is off to the Fort Macleod Sharks and Nanton Marlins Invitational Swim Meet this weekend, the last competitive meet before regionals in Lethbridge Aug. 4-7.

“Cross my fingers, I expect a pretty big turnout. This is a very important meet, it’s the last time you get to swim your events to see how you stand with your times in the province and make sure everything is fine tuned,” said Cook.