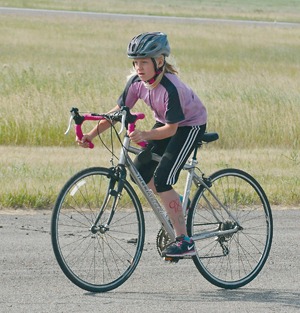 The 2015 Southern Alberta Summer Games had an unusual competitor in Claresholm earlier this month.

But the pilot who flew a single-prop plane likely did not meet the qualifications for the cycling event of the Games on July 9.

Locals had a bit of a scare when they noticed the single-prop plane had to make an emergency landing due to low fuel at the Claresholm Industrial Airport — while children were still competing on the runway in the cycling event.

“You see the plane come down, and the way it circled, you can tell it was coming in on final (approach),” said a chuckling Taberite Darcy Firth who was at the Claresholm airport watching his son compete in the cycling event during the Southern Alberta Summer Games, which concluded July 11, not believing what he was seeing at first.

The U8 division was competing at the time, according to Firth, and luckily kids were just finishing their race as the plane circled above at first.

“The ambulance held off the racers and then went up to the plane and had a chat with the guy and 10 minutes later the RCMP showed up. The ambulance had to pull off to the side because there was no way it was getting out of the way in time (from the plane) with that long of a stretch.” said Firth.

“He pulled off to the side, giving as much room as he could and the plane rolled on past him.”

After the incident happened there was some confusion, and perhaps a little anger among parents, wondering why the airfield wasn’t closed off.

“The first thought I had was ‘we are on an airstrip, did anyone call and make arrangements to have it shut down (for the Southern Alberta Summer Games)?,” said Firth.

Organizers assured parents that clearance was made to have the area be a no-fly zone with no landing permitted for the duration of when cycling was going on at the airport for the Southern Alberta Summer Games.

Staci Muller, another parent who was at the event confirmed there were kids out on the runway when the incident happened on the morning of July 9.

As people inquired about the reason the plane landed, Muller added they heard that whatever destination the plane was originally going to, the pilot discovered he would not have enough fuel to get there.

“It was an emergency landing where it was supposed to be a closed airfield with no planes,” said Muller. “We also cycled in the evening and Friday night the adults were cycling again with their time trials and as soon as the last adult was done, the plane took off.”

The pilot’s keys were taken away until all the Summer Games cycling was over which meant an overnight stay for the plane at the airport.

“As soon as we were done, he took off and we were all standing on the other runway waving at him,” said Muller with a chuckle. “We never met the guy or whatever so we didn’t have any hard feelings. But I think he was a little bit upset with the situation from what I’ve heard.”

Proud parents were clicking away with their cameras as their children pedaled their hardest, not knowing at first what was in the airspace above them.

“All the sudden you hear ‘get off the runway!!!! There’s a plane landing!!!’ Parents are saying ‘where?’ because it was such a small plane and you didn’t see it until it was nearly landing,” said Muller. “It was funny in a way because thankfully kids were just finishing off that main runway. It could have turned out very different if the kids were just starting or were in the middle of their race. It gave us something to talk about.”

Calls to the Claresholm RCMP detachment last Thursday to inquire from the attending officer of the plane incident about the situation, and if charges were laid for the pilot were unreturned as of press time for the Taber Times.