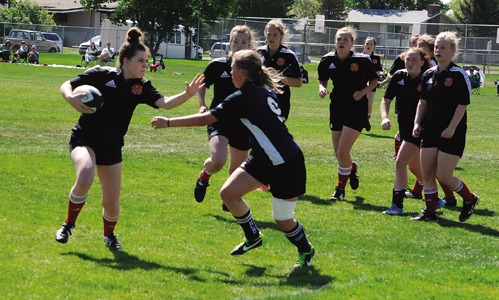 It was the perfect way to end a near-perfect season as the W.R. Myers Rebels junior varsity girls rugby club went undefeated in their first home tournament.

The girls beat out perennial powerhouses Raymond and Winston Churchill and dominated F.P. Walshe and Chinook for a 4-0 record.

“We did very well,” said co-coach Andrew Llewellyn-Jones. “We played four games and won all four.”

Previous wins against F.P. Walshe and Chinook during the season gave the team confidence they could beat those teams again, according to Llewellyn Jones, but a grinding win against Churchill earlier in the year and an undefeated Raymond team meant those two games were still very much up in the air.

The team defeated Winston Churchill by a score of 26-10, F.P. Walshe 42-0, and Chinook 26-0. Llewellyn Jones said the big game for his club was when they faced off against Raymond, and defeated them by a score of 20-10.

“That was a feather in their caps, for sure,” he said.

The JV girls have been a fast, fearless team all year, but the tournament also gave the squad a chance to shine in the defensive aspects of the game.

“Our defense was key,” said Llewellyn-Jones. Especially in the Raymond game. We didn’t allow Raymond to play their game. They are all very good runners and they are very fast, but we shut them down quickly. It was really interesting to see the Raymond team get frustrated because of that, and they got a little mad at the end, I think. Their unbeaten record was on the line, and they lost it.”

This is the first tournament hosted by a JV squad in Taber, and Llewellyn Jones said the event was a success for all involved. A number of parent volunteers and refs came together to ensure there were a lot of hands available to help.

“We’re hoping we can continue the tradition now of having the end-of-season JV rugby festival in Taber,” said Llewellyn-Jones.

“It was a beautiful day and everything went well,” he added.

The tournament also marked the first rugby tourney on the new field located at W.R. Myers, which Llewellyn-Jones said was in great shape and served as a good venue for the event.

The JV team went 14-1 in 15 games this year and was a dominant force in the league all season.

“I take my hats off to the girls,” said Llewellyn-Jones. “They really responded well to coaching and worked well together as a team. With 15 players on the field, you need good communication. And they did that very well. they listened and improved every game, and we went from strength to strength.”

“I’m looking forward to next season,” he said. “We’ll see what the winter brings with trying to get the squad filled, and then we’ll go from there.”

A number of JV players are headed to the senior team in order to take part in the SV squad’s zone semifinal game May 27 in Fort Macleod. Should the seniors win, they will be headed to zone finals on June 1 and a berth in the provincial finals in Edmonton.

Llewellyn-Jones said it has been a very successful season for both squads this year, no matter what happens in the SV girls’ team bid for provincial glory.

“They did the Wales tour at the beginning of the year and it was the trip of a lifetime. I have to credit the Horizon School Division with a brand new field out there (at W.R. Myers), and all the coaches and volunteers this year.”

“Most of all, the girls have responded really well, and I think we have a little bit of a rugby culture going now,” he added “Girls are coming up and they want to play the game, and I think that’s the most pleasing aspect of the season, when you see things like that happening.”