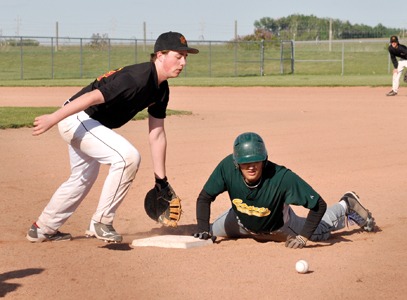 W.R. Myers Rebels baseball team continues to find its groove after posting a 2-1 record in a busy week on the diamond.

The team traveled to Coaldale on the weekend and split a pair of exhibition games.

“We threw strikes and played defence. We also put the ball in play and good things happened,” said Brendan Miller, head coach of the W.R. Myers Rebels baseball team. “We were up quite a bit and then we let them back in it giving up two runs every inning, a little bit here and there, but we were in control the whole time. It was a great team effort, everyone got on base.”

The Rebels then ran into a buzzsaw of a Nelson, British Columbia team where W.R. Myers was shutout by quality arms.

“They had two of the best arms we’ve seen all year. We got no-hit by them,” said Miller. “We hung with them for the first three innings, and then it got away from us.”

Last Wednesday’s game at home at Ken McDonald Memorial Park was a see-saw battle which the Rebels eventually won against Milk River in league competition.

“We had to deal with a little bit of adversity being up by nine runs and then down five runs the next inning,” said Miller of the Rebels almost letting it slip away in a disastrous 14-run inning for the opposition. “It was a combination of not throwing strikes and not playing defence that inning and Milk River took advantage of it hitting the ball.”

The Rebels showed their resolve by bouncing right back and delivering plenty of offence of its own to seal the win.

“We couldn’t tell how much that inning was affecting them because at the end of the day, we won by 10,” said Miller. “A 14-run inning is tough to go through whether you show it or not, but they bounced back hard.”

Miller noted his Rebels team is night and day from what it was in the first half of the season to the second half in the quality of play on the diamond.

“I like how you can see the improvement. We started off 0-7 to start the season and the last seven games we are 4-3. With the practices and the guys getting more repetitions, that improvement is starting to show,” said Miller. “That’s pleasing as a coaching staff, because you can coach as much as you want, but until you get to the games, that’s when you see the hard work the kids put into action.”

The Rebels travel to Foremost today in league play, with a home game on Tuesday against Eagle Butte. Game time on Tuesday is 5:30 p.m. at Ken McDonald Memorial Sports Park.