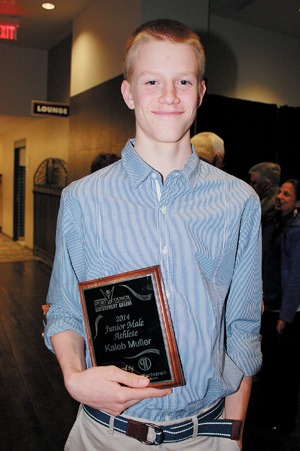 For Kaleb Muller, it doesn’t matter if the ice is on a short track or long track.

He likes them both and excels at both, although the six-foot-two 16-year-old speedskater thinks his future is in the oval rather than the arena.

Muller had an impressive year capped on Arpil 14 at the Enmax Centre when he was named the top junior male athlete at the Lethbridge Sport Council’s fifth annual achievement awards, which were handed out for contributions to sport in Lethbridge in 2014.

“It’s an honour,” said Muller, who is from Cranston, just west of Taber. He is a Grade 10 student at St. Mary’s in Taber.

Muller just got back from the 2015 Canada Winter Games where he finished with a personal best performance by placing 11th. He calls that the highlight of the season.

“It’s just the timing and the experience, so later in my career I’ll have experience to know how to handle such a big event,” he said. “I’m getting into bigger competitions now.”

He was also selected to represent Alberta at the Canadian Long Track Speed Skating Championships in Quebec City, but declined his spot in order to compete in the Alberta Games, where he earned top spot.

Muller said he also used this past season to adjust to skating against older competition.

“It definitely motivates me because I have to work that much harder, especially in training, just to do good in those competitions.”

“My husband and I are proud of him,” Muller’s mother, Staci, said of her and his father John. “He puts in the extra training. We’re proud of what he’s done so far.”

Muller made the provincial team for both long-track and short track, and has a long term goal of making the Olympics and the world championships.

“I would like to go as far as you can, but we’ll see what happens,” he said.