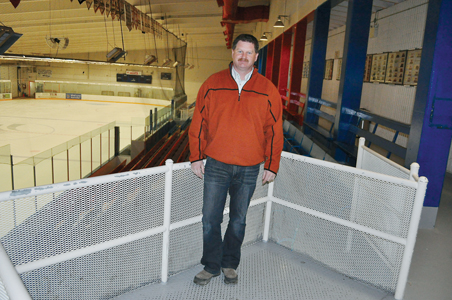 He had made his way to introductions to the Taber Recreation Board and Taber town council — now he is dropping by to say hi to Taber Times readers.

Trent Smith is the new recreation supervisor for the Town of Taber.

“This position is basically along the same lines with assisting (Aline Holmen) in overseeing the pools, parks and arenas,” said Smith who started his first official day Feb. 9. “It’s been great, Taber is a great town.”

A family man with three daughters and a son, Smith has purchased a house in town as he continues to get his feet wet in the new position.

“I’ve been in recreation since 1998. I was also recreation director for the Town of Nanton. Providing sports and recreation for kids is big for me along with the rest of the users,” said Smith.

With the 4-on-4 Hockey Tournament this past weekend, that marks the end of the hockey season where now Smith will be shifting his attention from the arena to the nice spring weather involving the outdoor fields and parks.

“There’s a lot of people involved so people can enjoy their recreation time. It’s a team effort,” said Smith.

Smith is well versed in training wise, holding the Western Regional Masters Technician in Recreation along with multiple other arena and pool operator and parks diplomas. Smith is also an instructor for arenas and pools in Alberta.

When he is not working recreation, Smith enjoys it. As well as an avid curler and playing slo-pitch, Smith was a former hockey player as well.