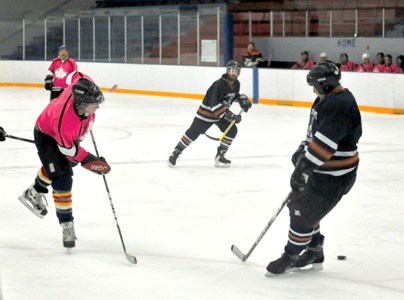 Taber initiation 2 Oil Kings played in a tournament in Fernie to conclude its season on a high note, winning all three of its games.

The first was a 20-1 win over Fernie Ghostriders.

Lincoln Wiebe had two goals and Maizie Skiba and Branson DeVlieger had singles.

Skiba got the Digger Award.

The team then earned a 12-9 win over Crowsnest Pass Thunder. Wiebe, Weiss, and Remfert all had hat tricks and Umbach had two tallies. DeVlieger notched a single.

Dominic Loewen got the Digger Award.

Oil Kings finished off its season with a 13-5 win over Elkford.

Weiss, Wiebe, Umbach and Remfert all had hat tricks. DeVlieger scored a single.

Taber initiation 1 Oil Kings beat Vauxhall 23-1 in its final game of the season on Saturday.

Tate Nakashima and Ryler Kiss had two tallies and Andrew Appleton had a single.

BANTAM: Taber bantam ‘A” Oil Kings won its playoff game 3-2, with Dawson Hendricks scoring the game winner with 1:53 left in the third period over the Hussar Knights.

NOVICE: Taber novice 2 Oil Kings had a very busy week of hockey to end its season.

The team competed in the second round of its playoffs and dropped both of its games to Raymond.

The first was a tight 3-2 loss. Nathan Planger scored both goals for Taber with Devan Loewen getting an assist. Evan Koizumi was in net for both playoff games.

Novice 2 Oil Kings were eliminated from the playoffs with a following 5-3 loss.

The team also competed in a tournament in Medicine Hat and emerged with a 2-2 record.

The first game was a 4-2 doubling at the hands of the Medicine Hat Jets.

Damian Beswick and Langdyn Cummins tallied for the Oil Kings who got an assist from Sam Tolsma. Tage Jensen was in net.

The team then dominated Midnapore Mavericks 10-2.

Hayden Span and Koizumi each had three goals apiece with Span also getting an assist.

Loewen had a goal to go with two helpers. Kress had a goal and an assist and Tolsma and Planger each had singles. Shaylee DeBona earned the win in net.

Oil Kings continued on to be narrowly defeated 4-3 by Lake Diefenbaker Lightning.

Jensen and Planger each had goals and Koizumi had a goal and an assist. Bell had goaltending duties.

The team finished off its season on a high note with a 13-4 win over Medicine Hat Stars.

Bell, Cummins and DeBona each chipped in two helpers.

Loewen and Tanner Fletcher each had assists.

Kress earned the win in net.