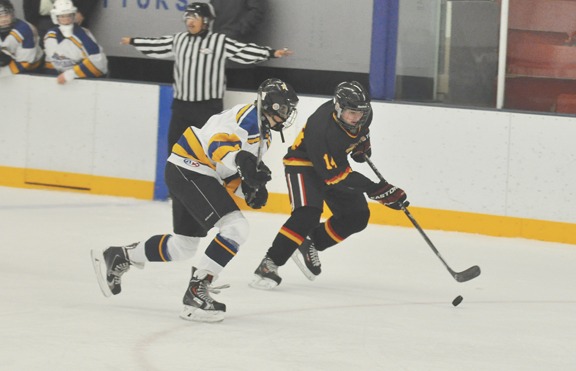 Taber Golden Suns teams emerged from weekend play without a win, as the peewees had a tie and a loss, while the bantams suffered two losses. Taber’s midget team was idle.

Against the Lightning Red, Taber fought back from a 3-1 deficit in the third period to earn the draw. Colby Garner scored for the Suns, as Quade Hughson and Derrien Tonin drew assists, to tie the game at one, as the powerplay marker left the teams at 1-1 after one.

Airdrie goals in the second and third period gave the home side the leave, before J.D. Hall scored for the Suns to make it 3-2, and Hughson register another unassisted tally to tie it.

Blake Vaselenak made 27 stops in goal for Taber.

The Suns returned home Sunday, as Taber fell 6-2 to the Cranbrook Eagles, as the visitors scored early and often.

Cranbrook opened up a 4-0 lead before Hughson responded with a powerplay goal, assisted by Garner. Tonin made it 4-2 with a shorthanded goal but in the end, it was as close as Taber would get, as Cranbrook scored twice in third, once into an empty net, to steal the win.

Brayden Peters made 31 saves in the loss.

The peewee Suns will take on the Lethbridge Hurricanes Red on Sunday, in a 3:30 p.m. game in Taber. The Suns sit in second place in the south division with 48 points and a 23-6-2 record.

BANTAM: The bantams dropped a 6-3 decision Friday to the Badlands Longhorns to start the team’s SCAHL weekend. Taber trailed 3-2 after one, as William Wallace scored twice for the Suns, with assists from Kyle Hulit and Ryden Rempel.

Mason Sande tied the game at three, early in the second, before the Longhorns scored three unanswered goals to seal the victory.

Carson Adams made 35 saves in a losing effort for Taber.

Taber returned to the ice Saturday and dropped an 8-4 decision to the Sylvan Lake Young Guns Lakers. The teams traded goals early in the first, as Hayden Mack made it 1-1 on a goal assisted by Daylen Parker and Kolten Heins, and Sande tied the game at two on a goal from Wallace and James Halverson. Sande scored again late in the first, as Halverson and Wallace drew the assists, to make it 4-3 Sylvan Lake after 20 minutes.

But the Lakers would go on to score four more goals to make it 8-3, before Halverson tallied a powerplay marker in the third, set up by Sande and Wallace, to round out the scoring.

Dalton Demers made 48 stops in the contest, as Taber was outshot 56-21 in the game.

MIDGET: The midget Suns, who sit in fourth place in the south division with a 12-15-6 record, host the Foothills Bisons on Valentine’s Day in a 8 p.m tilt at the Taber Community Centre.