Peewee Suns in tough in playdowns 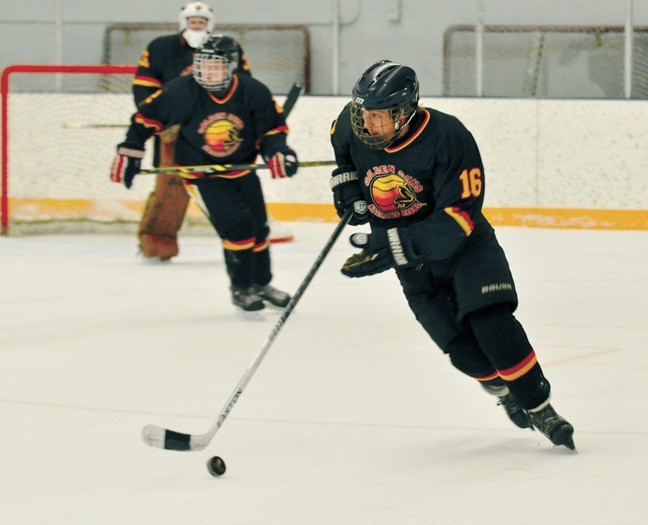 Taber peewee “AA” Golden Suns (23-5-1) were victorious in both its games in South Central Alberta Hockey League play over the weekend.

“I was hoping for a little better effort both games. We have provincial playoffs games, and we were kind of looking for a little more momentum,” said Clark Hughson, head coach of the Taber peewee ‘AA’ Golden Suns, perhaps implying the weekend games were closer than they needed to be against opposition that were well below .500. “We didn’t seem to have much jump.”

The team then proceeded to edge Medicine Hat Venom Black 3-2 on the road on Saturday, as the Suns withstood a late Venom (7-19-2) comeback of two goals in the last nine minutes of the game.

The strategy will be the same as it always has in trying to contain the most dominant line in the SCAHL as far as portion of scoring goes in Zack Stringer (112 points), Ridly Greig (109 points) and Dawson Leroux (70 points). The next leading scorer has 31 points.

“We have to shut down that one line and shutdown their power play and try and stay out of the penalty box,” said Hughson. “Other than that, stick to our game and play fast paced and be tenacious on the puck. If we do that, we will be right there.”

As the Taber Golden Suns come down the home stretch of its SCAHL regular season with three games left to play, there may be ramifications in the standings for playoffs.

Taber peewee “AA” Golden Suns sit in second place in the South divisions, three points out of first place, behind Lethbridge Hurricanes White as both teams have played 29 games. The Golden Suns are five points ahead of third-place Cranbrook Eagles, although the Eagles have a game in hand.

“We are in second and it would be nice to stay in second (at least) for travel reasons for the playoffs,” said Hughson. “We are going to see a lot of Lethbridge I’m sure. We need to keep our speed game going and get our jump. We will be fine if we keep our energy up.”

MIDGET: Taber midget “AA” Golden Suns (12-15-6) took a loss and a win in its two SCAHL games over the weekend.

The team’s first game was a 8-4 doubling at the hands of the Wheatland Chiefs (23-4-3) at the Taber Arena on Friday night.

Brandon Langridge notched the hat trick for the Suns who got a single from Austyn Moser. Jedd Horvath and Dylan Heppler each drew three assists. Ryan Tessemaker had a single helper. Broc Merkl was under siege, facing 59 shots on net.

The team turned around to shutout NWCAA Bruins 4-0 at the Taber Arena on Saturday night.
Heppler had two goals and Moser and Tyson Tessemaker had singles. Langridge, Horvath, Jeff McDonald and Riese Nevil had assists. Dylan Swanson was solid in net, stopping all 40 shots he faced.

Taber midget “AA” Golden Suns have the week off from SCAHL regular season play, but return home on Feb. 14 with a game against Foothills Bisons at 8 p.m. at the Taber Arena.

The team bounced back with a 4-1 win over Olds Grizzlys (1-26-2) on the road on Sunday.
Kole Fujita tallied twice and Mason Sande and Kyle Hulit had singles. Heins and Hayden Mack both drew two assists and Hulit had a single helper. Demers faced 25 shots on net for the win.