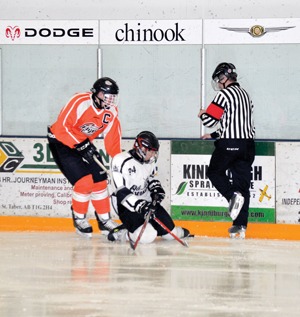 Both novice Oil Kings were in minor hockey play this past weekend with Taber Novice 1 Oil Kings earning a tie and a win.

The tie came against Picture Butte Blades 6-6, on Saturday.

Duell had four goals to go with five assists. Jensen and Kramer each potted hat tricks. Jaxon Coutts had two goals and Damberger and Carson Love each scored singles. Jessica Turgeon recorded two assists and Kramer and Krahn each had single helpers. Kahil Wright earned the win in net.

Taber Novice 2 Oil Kings split its pair of games, starting off with a 6-4 win over Cardston on Saturday on the road.

Nathan Planger had the hat trick and rounding out the scoring with singles were Zachary Fehr, Kayden Kress and Devan Loewen. Tage Jensen had an assist. Rex Bell earned the win in net.

The team then fell 8-6 to Pincher Creek on Sunday.

Planger had another hat trick and Bell, Jensen and Shaylee DeBona had singles. Evan Koizumi, Langdyn Cummins, Damian Beswick and Loewen all had assists.

ATOM: Taber Atom ‘A’ Oil Kings won both of its home league games this past weekend.

The first was a 10-4 victory over Chestermere on Saturday.

Sunday’s tilt was a 9-6 win over Airdrie.

PEEWEE: Taber Peewee ‘B’ Oil Kings played Bow island twice with a loss and a tie.

Taber Peewee ‘A’ Oil Kings skated to a 6-3 win over Medicine Hat on the road last Tuesday.

BANTAM: Taber Bantam ‘A’ Oil Kings split a pair of games over the weekend.

Sunday’s contest was a 6-5 loss to Hussar.

MIDGET: Taber Midget Oil Kings were edged 5-4 by the Thrashers on Saturday.