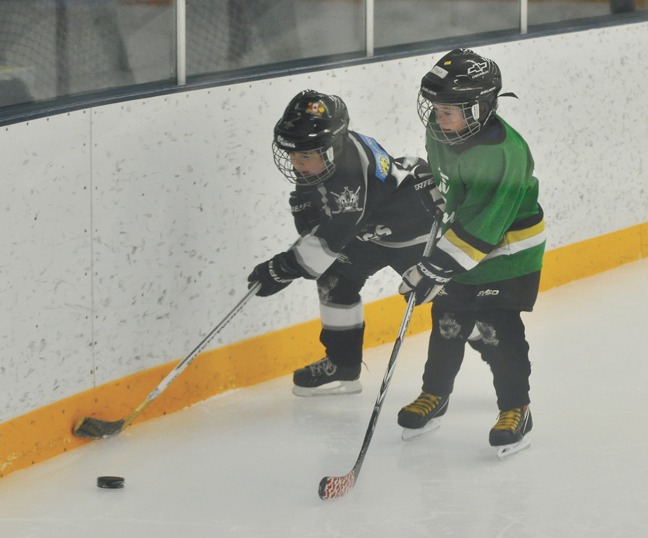 Initiation Oil Kings teams had its home tournament over the weekend at the Taber Arena with Initiation 1 Oil Kings winning all three of its games.

The first was an 11-7 win over Lethbridge Tigers on Friday.

The team went on to beat Strathmore Timbits 14-6 on Saturday morning.

Taber Initiation 1 Oil Kings finished off with a 16-9 win over Medicine Hat Sharks on Sunday.

Peters, Anderson, Stronge and Hansen all had hat tricks. Miller tallied twice and Kiss and Lucas Kerkhoff had singles.

The Oil Kings’ first game was a 10-6 loss to Chestermere Blue on Saturday afternoon. Lincoln Weiss had the hat trick and Konnor Wiebe had two tallies. Avery Remfert had a single.

The team bounced back with a 16-2 win over Lethbridge Tornados on Saturday night.

Oil Kings finished its tournament run with a 14-2 win over Okotoks Penguins on Sunday afternoon.

Wiebe, Weiss, Remfert and Capner had hat tricks and James Ruggles and Umbach had singles.

Kade Duell notched four goals to go with an assist. Carter Jensen had two goals and Jaxson Coutts recorded a goal and an assist. Tristen Egeland recorded an assist. Kahil Wright earned the win in net.

Taber novice 2 Oil Kings were also victorious in their one game, a 4-2 doubling of Vauxhall.

Langdyn Cummins had two goals and Blake Rabusic and Sam Tolsma each had one goal apiece.

Devin Loewen and Damian Beswick each had an assist. Nathan Planger earned the win in net.

ATOM: Taber atom ‘A’ Oil Kings earned a tie and a loss in two Tier III road games over the weekend.

The first was a 4-4 tie with Drumheller on Saturday.

Nathan Verloop and Zachery Hauck each had a goal and two assists in the contest. Kyler James and Rylan Millo had singles. Luke Turgeon earned the tie in net.

Atom Oil Kings then dropped a 13-7 game to Olds on Sunday.

PEEWEE: Taber peewee ‘A’ Oil Kings dropped a 10-5 decision to Coaldale on Sunday.

Taber peewee ‘B’ Oil Kings were able TO take a 12-4 win over Kainai.