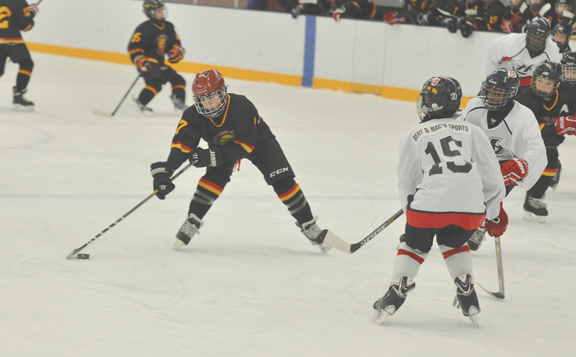 Sunday’s tilt in South Central Alberta Hockey League play between the Taber peewee “AA” Golden Suns and Lethbridge Hurricanes White at the Taber Arena lived up to its billing.

The Suns battled back from a 4-2 deficit two minutes into the third period to take a 5-4 lead, but then surrendered it with a mere seven seconds left on a 6-on-4 with the goalie pulled and the Hurricanes on the power play.

“It was a really good game that went back and forth. We had them with seven seconds left and they tied it up,” said Clark Hughson, head coach of the Taber peewee “AA” Golden Suns.“I think we definitely could have won.”

Hughson had two objectives to victory before the game.

The Suns were able to do that for the most part with Stringer scoring a lone tally and the trio managing a combined five points despite a five-goal outing.

The other was to stay out of the penalty box to counteract the Hurricanes potent power play. The Golden Suns had its problems there, drawing eight penalties to the Hurricanes one, surrendering three power play goals in the process.

“We shut down their top line for the most part, their top player (Stringer) had one goal and it was a bit of a fluky one and that Greig kid didn’t score. You look at their lineup and they do like 80 per cent of the scoring, you have to shut down that line for sure and hope the rest of our guys can hold their own and score some goals against some of the other lines,” said Hughson.

“Even our shutdown line got us a goal and our other lines filled in with goals. It was fast paced with a lot of action. We took a few more penalties than I would have liked and that was the difference between a win and a tie.”

Perhaps looking too far ahead to Sunday’s marquee match up, the Golden Suns stumbled against an Okotoks Oilers Green team (17-5-3) on the road on Friday night in a 6-2 loss.

Derrien Tonin and Blake Kondor scored for the Suns, who got assists from Haney and James. Peters faced 41 shots on net in the loss.

“I was a little disappointed with Friday’s game. We got in penalty trouble there too (11 penalties resulting in four power play goals). We came out flat,” said Hughson. “We really never had the wheels and the penalty trouble didn’t help.”

Wedged between the two games was a 13-0 shutout of the Southwest Rockies on the road on Saturday.

Derrien Tonin had the hat trick and Hughson and Nolan Price each had two goals apiece.

BANTAM: Taber bantam “AA” Golden Suns skated to a 3-3 draw with Airdrie Lightning at the Taber Arena on Sunday afternoon.

Just before the all-star break, Taber bantam “AA” Golden Suns have a Friday tilt against Lethbridge Hurricanes on the road. The team returns home on Jan. 23 with a game against Bow Valley Timberwolves at 8:30 p.m. with another home game on Jan. 24 against the Lacombe Rockets at 3 p.m. at the Taber Arena.

Taber midget “AA” Golden Suns started off with a 2-2 draw against Lethbridge Hurricanes at the Taber Arena Friday night.

Austyn Moser and Justin Tams scored for the Suns along with both drawing assists. Brandon Langridge also drew an assist. Broc Merkl faced 35 shots on net to earn a tie.

The team then dropped a 3-2 decision to Foothills Bisons on the road.

Taber midget “AA” Golden Suns ended its SCAHL weekend skating to a 2-2 draw with Lacombe Rockets on the road.