Gabruck returns to the bench for St. Mary’s 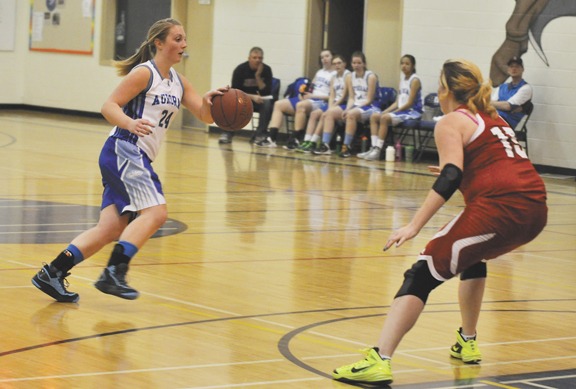 The St. Mary’s Auroras girls basketball team home tournament had a retro feel to it as Ken Gabruck was at the helm.

It was the first time Gabruck had been coaching since the 2010-2011 school year after retiring from teaching/coaching after 38 years. Gabruck was the athletic director for St. Mary’s School, giving those responsibilities to A.J. Bergenhenengouwen upon his retirement.
Bergenhenengouwen has served as the head coach of the Auroras this season, but was called away to wedding duties in Cuba as a groomsman in which Gabruck was called in on an emergency basis for the weekend.

“It was a last-minute thing for a few days. It was a little difficult at first, I knew some of the girls, like half of them. The other girls I didn’t really know what their skill level was with who were the starters and which players played which positions,” said Gabruck.
“I went on what the girls had told me what they were doing.”

The Auroras opened its tournament with a 45-22 loss to Matthew Halton/St. Michael’s.
Mirthe Kleinjan had six points for the Auroras and Eline Kleinjan, Megan Mankow and Daylin Holmen all chipped in four points.

“We tried to keep it as simple as possible. It’s still early in the season and coming off the Christmas break with a limited amount of practices. The girls hung in pretty good until about 12 minutes left in the game, the score was 24-19 for Pincher Creek. But then Pincher Creek went on a stretch,” said Gabruck. “Basically seeing after the first night with the offence they thought they could run from before, it just didn’t work. So Saturday we decided to come up with an offence that was fairly simple.”

The Auroras continued with a 70-28 loss to St. Joe’s Collegiate from Brooks. Kallee Bonette had eight points and Mankow had six.

“We had a 7-2 lead to start and then they put on the press and the girls really struggled to get out of the press, turning the ball over time and again. The girls didn’t have a press break they were confident in and tried to dribble out of it creating more turnovers,” said Gabruck. “St. Joe’s kept the press on for the remainder of the first quarter and part of the second and the game was over by the 15-minute mark. They racked up a lot of points off the press.”

Playing in the seventh-place game, the Auroras dropped a 43-26 game to Rosemary. Jessie Braun had five points in the game and Holmen added four.

“It was fairly close throughout the first half. But they had some fairly strong post players that we got into foul trouble trying to stop,” said Gabruck.

The championship final of the Auroras tournament featured the Chestermere Lady Lakers beating the Vauxhall Queens.

While the Auroras were unable to secure a win, Gabruck was able to secure that spark for coaching he had thought he had lost on the tail end of an impressive coaching career spanning since the 1970s.

“One of the things I had to do was stay away from it for awhile in losing the urge to go back and coach,” said Gabruck. “If I was around watching all the games, I probably would have been back coaching right now. It was something I enjoyed doing. The coaching juices, the excitement that goes with teaching did come back that (weekend). It was a good experience, it was good to have that feeling again that you can contribute.”