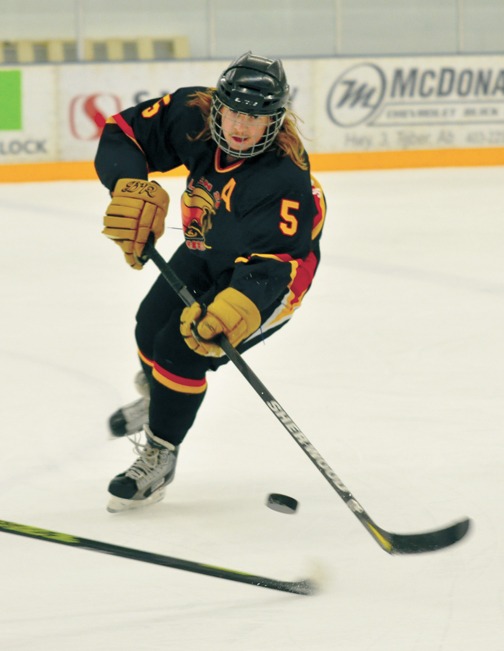 “It was one of those games where we outshot them. Their goalie played well, but it seemed like pucks were bouncing over our sticks and all those types of things,” said Clark Hughson, head coach of the Taber peewee “AA” Golden Suns.

Kolby James and Quade Hughson led the way for the Suns with two goals apiece, and Kalem Haney notched a single.

Brayden Peters earned the win in net, facing 43 shots on goal as the Suns were under siege near the end to preserve the win.

“We got in some penalty trouble late and they tied it up (at one point). Getting the lead, we had to kill off a 5-on-3,” said Hughson. “We managed to keep the lead and win the game. We did what it took.”

“We’re doing really good. It shouldn’t be too tough of a game (against the Venom), but you never know. It depends on what team decides to show up and play,” said Hughson.

MIDGET: Taber midget “AA” Golden Suns (9-8-2) earned a single point in the standings by earning a tie and loss over the weekend in South Central Alberta Hockey League competition.
Friday night saw the midget Golden Suns skate to a 5-5 draw against the Medicine Hat Venom (2-14-2) at the Taber Arena. Austyn Moser, Brandon Langridge, George Bertoia, Clay Nevil and Riese Nevil spread out the scoring for the Suns. Logan Wiebe, Dylan Heppler and Moser each had two assists apiece for the Suns. Jedd Horvath, Bertoia, and Langridge each had single helpers. Broc Merkl faced 30 shots on net in the tie.

The team proceeded to drop a 6-1 decision to Wheatland Chiefs (14-1-1) on the road on Sunday. Horvath scored the lone Suns tally with assists from Moser and Langridge. Dylan Swanson faced 47 shots on net in the loss.

Taber midget “AA” Golden Suns do not return to SCAHL play until Dec. 12 with a home game against CRAA Blue at the Taber Arena at 8:30 p.m. The team then travels to Cranbook that weekend on Dec. 14 for a game against the Knights.

BANTAM: Taber bantam “AA” Golden Suns (3-14-2) earned a tie and loss against two Red Deer teams respectively on the road over the weekend in SCAHL play.

Saturday’s tilt was a 3-3 draw with Red Deer Ramada (3-7-6). Seth McCulloch, Daylen Parker and Mason Sande all scored for the Suns. Haysyn Ostrup, Brandon Hauck, Quinn Slezak, and William Wallace drew assists. Carson Adams earned the draw in net, facing 31 shots on goal.
The team proceeded to drop a 3-1 decision to Red Deer Steel Kings (3-10-4) on Sunday. Sande scored for the Suns who got assists from Kole Fujita and Kolten Heins. Dalton Demers faced 37 shots on net in the loss.