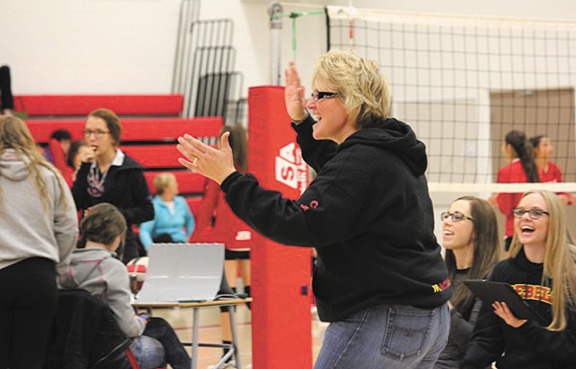 “I feel actually pretty awesome. It feels good. To be voted by your collegues, the other coaches, your peers — it feels good.”

This is the first the long-time coach has been honoured with an award for her skill and dedication in helping craft quality volleyball players.

Schramm has been involved in coaching volleyball since the early 1990s.

“This is the first coaching award I’ve won, and I’ve been coaching over half my life.”

Schramm was a star volleyball player in her youth, earning accolades at the college athletics level.

“I played high school volleyball, and then I played two years at Lethbridge College. My first year of college I was MVP.”

Coaching volleyball offers a profound sense of fulfillment for Schramm, especially when she sees the skills she attempts to impart blossom into fruition on the court for young players.

“I love the game. I love the kids. I love to watch the progression, when you teach them a skill and you see it click, it actually works — to see it work and come together.”

The veteran volleyball coach had some words of encouragement for individuals that might be considering trying their hand at involvement in coaching athletics.

“You definitely have to be willing to put in the time, for sure. It’s not all easy — at times it can be very frustrating.

“But at the end of the day, it usually works out, and it’s very fulfilling.”

Schramm heaped praise on her team this year.

“I had a great group of girls and parents this year. It was a good year and very good season.”