Jensen giving back to Rebel football 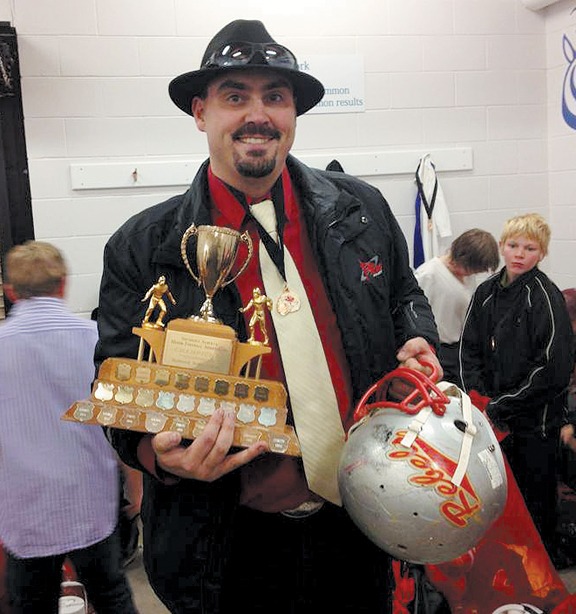 He is a Rebel With a Cause through and through when it comes to his love for the gridiron game.

“I managed to get ahold of my old jersey which I still had and more recently I managed to get ahold of the helmet I wore in high school and they were two things that were very important to me. I always tell the kids when you pull on the jersey you become something bigger than yourself,” said Jensen. “To me, that is the best thing about football. When you step on the field, you have to put your ultimate trust in your teammates, not just to win games, but your safety is in the hands of your teammates. You have to trust that guy is going to block for you, or you may get injured. That is part of what the jersey and helmet symbolizes.”

Jensen was part of the Rebels football program until the fall of 1997, having played both bantam and high school football at W.R. Myers as there was no atom or peewee programs to speak of back then, although bantam started in Grade 7.

“Football is probably one of the most formative things that has ever happened in my life. I didn’t have great self esteem when I was younger,” said Jensen. “I wasn’t the most athletic kid growing up and I didn’t feel like I belonged until i got into football. That’s what I love about football. There is a spot for every kid. It teaches teamwork, trust and discipline like no other sport I’ve encountered. It did a ton for me self-esteem-wise and athletically health-wise.”

Football was an itch Jensen has not been able to scratch since he graduated from high school. An avid CFL/NFL fan of his beloved Calgary Stampeders and Green Bay Packers, a goal of Jensen’s had always been to get into coaching to continue his passion for the game.
Jensen did a little bit of coaching in Lethbridge for the Winston Churchill Bulldogs in 2001 under the tutelage of former W.R. Myers Rebels defensive co-ordinator Jay Hansen who was manning the helm at Winston Churchill. But it was like putting a square peg into a round hole as his Taber football roots were still very strong.

“This Rebels football program has always stuck with me. I never felt right, especially when it came down to a chance to play the Rebels, it was something I couldn’t handle,” said Jensen.

Jensen switched his gaze to back home in Taber for possible coaching opportunities, unsure if he would be able to coach younger kids as opposed to high school. It got to the point Jensen had a couple of nephews playing at the atom and peewee levels in which he was constantly around the field cheering them on. There he befriened at the time the peewee coaching staff in which he was approached to help out with his expertise.

“One thing led to another and I was back in it. This is my fourth year coaching with one year of peewee and three years of bantam,” said Jensen.

During football season, nary an evening will you see Jensen at his home in Lethbridge, but rather rushing into his vehicle to get to a 5:30 p.m. practice on time or home games on the weekend. Even for the Division III championship game earlier this month in Lethbridge, Jensen made sure he was on the team bus to be with the team as a sign of unity, going straight back t a place he already lived.

“Growing up, there were people in this community that gave their time to me, to help me, to coach me. It’s important for me to give back to this program that way,” said Jensen.
“Coaching my nephews has been nice, but that’s not why I do it, it’s been sort of a bonus. Next year I probably won’t be coaching any of my nephews, but It won’t put a damper on things at all. It has been wonderful, fantastic. This feels very rewarding, it feels like I’m accomplishing something, it gives me a good sense of worth.”

Nov. 4 can be circled on the calendar as the first time Jensen bought groceries since middle of August. The six-foot-seven giant whose heart for football is as big as his is, has not had enough time in the fall during football season to even worry about having perishables around.
“Typically, I crash at my parents’ place in Taber during weekends (and game days),” said Jensen.

There may be the Xs drawn on the board devising plays in football, teaching proper tackling and shedding techniques along with stances, but there is also the delicate balancing act one must coach in the mental aspects of the game in dealing with teenagers.

As Jensen basks in the afterglow of the moviesque 26-25 victory the Rebels were able to accomplish on Nov. 1 over the Lethbridge Bulldogs in the Division III championship, there were victories within the team that went far past the scoreboard.

“This team has gelled more so than any other team I’ve coached, and truth be told, I’ve been pretty happy with every other group we’ve coached so that’s saying something,” said Jensen. “We’ve got a couple of what I call uncommon leaders on this team this year that really helped with that in Wyatt (Thurston) and Evan (Harkness) that really stepped up and kept everything together. It was picking up kids when they are down. Anyone can pick out flaws, it’s a matter of can you inspire kids when they are down.”

There have been a lot of football championships that have come out of Taber. But even more important for Jensen, a lot of good men in lessons learned from football.

“It’s about being good people. It’s about working together for a greater good. I’ve seen kids this year where it’s happened. ” said Jensen. “We’ve had kids that are shy that I found out didn’t really have friends and it has all changed for them. All the sudden, they are outgoing and hanging out with guys they play football with and are out being social and some of them are even doing better in school. For some of these boys, this is the first time they have been somewhere where they feel like they belonged. That is another thing that helmet and jersey symbolized for me. Not just being part of something now, but forever.”

Jensen will never claim to be as great of a football mind as all-time Packers’ great Vince Lombardi, but he and coaching staffs he has served on must be doing something positive with the youth they have coached

“That’s a great feeling when kids come up to you wanting to make sure you are coaching them next year. You know you are doing something right out there,” said Jensen. “Training up football players is great. I love the sport of football, I love teaching the skills and strategy involved in it. But what I love even more is crafting character, and we are turning out some pretty good young men from this program.”