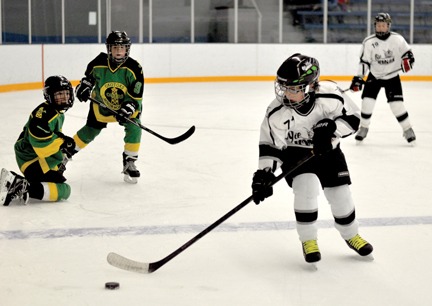 The first game was a 5-1 win over Fort Macleod on Saturday on the road.

Ryan Hewitt and Ryan Hubble had two goals apiece and Dawson Hendricks had a single. Andrew Makarchuk and Brady Howg had assists.

PEEWEE: Taber peewee ‘A’ Oil Kings earned a win and a tie in minor hockey action over the weekend.

Oil Kings hit the road on Saturday and earned a 14-6 exhibition win over Foremost.

The team then earned a 4-4 draw against Coaldale Cobras at home on Sunday.

Oil Kings play on Saturday at the Taber Arena against Medicine Hat at 12:30 p.m.

NOVICE: Novice 2 Oil Kings were victorious in both of its games on the weekend starting off with na 6-4 wi over Lethbridge on Saturday.

Oil Kings proceeded to earn a 4-3 victory over Pincher Creek. Jensen had two tallies and Kayden Kress and Hayden Span each had singles. Tolsma drew an assist.

Taber Novice 1 Oil Kings earned the split in its games on the weekend.

The first was a 9-5 road loss to Irvine Bulldogs on Saturday.

Kade Duell had four goals and an assist and Jaxson Coutts had a single.

The Oil Kings bounced back with a 15-4 home win over Crowsnest Pass Thunder on Sunday.

Duell and Carter Jensen each had four goals apiece and Carson Love, Wieler Krahn and Hunter Damberger each had two tallies. Coutts had a single. Damberger had two helpers and Duell had one.