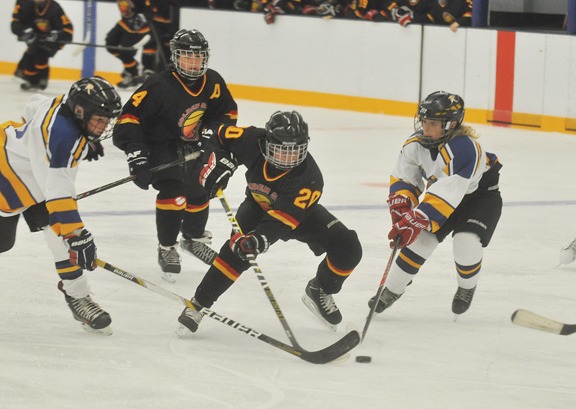 And by demolishing, scores resembled more like those found in football than in hockey as the Suns throttled Southwest Rockies 22-2 on Saturday at the Taber Arena and a 9-0 shutout of Okotoks Oilers on the road on Sunday.

“I think it was a little bit of both,” said Clark Hughson, head coach of the Taber peewee “AA” Golden Suns on whether his team was that strong or the Rockies were that weak in the lopsided score. “We took it easy on them, too. We weren’t trying to run up the score. We had forwards playing ‘D’ and defencemen playing forward. And we still kept scoring.”

Blake Vaselenak faced a mere nine shots on net to earn the win.

Special teams were humming for the Taber peewee “AA” Golden Suns on Sunday against the Oilers as the Suns registered four power-play goals and a short-handed goal in its 9-0 blanking.

“We stuck to our game plan of a fast-paced brand of hockey, short shifts and cycling the puck down low being a puck-possession team,” said Hughson. “no one can seem to handle that so far. We wore Okotoks down and we’ve worn everyone down we’ve played so far.”

“We are a really deep team this year with three lines where a lot of these teams have one or one-and-a-half lines,” said Hughson. “We have three lines that can score, in Okotoks we had nine goals and six different scorers. And we are pretty stingy on the defensive end too. Our centres are down low, clearing out second chances and we want to play a tight-defensive game too, we want to play a 200-foot game.”

“We have some good kids on the team along with a good parent group. I think we’re going to have a good year,” said Hughson.

BANTAM: Taber bantam “AA” Golden Suns dropped both of its games in SCAHL action this past weekend.

The first was an 8-2 loss to Okotoks Oilers on the road on Saturday.

In the 7-3 loss against the Foothills Bisons on Sunday at the Taber Arena, Sande, Mack and Daylen Parker scored for the Suns. Kole Fujita, Parker, Seth McCulloch and Brandon Hauck drew assists. Dalton Demers took the loss, facing 41 shots on net for the Suns.

The team skated to a 4-4 draw against Red Deer Indy Graphics at the Taber Arena on Friday night.

Dylan Swanson earned the tie in net by stopping 33 of 37 shots for the Golden Suns.

Moser scored the lone goal in the Taber midget “AA” Golden Suns’ 2-1 loss to the Lethbridge Hurricanes on the road on Saturday. Jedd Horvath and Brandon Langridge drew assists.

The goaltending duel in the contest had Broc Merkl facing 35 shots in the tough-luck loss that featured both teams exchanging power play goals.

Taber midget “AA” Golden Suns travel to Cranbook on Friday night to battle the Knights and then return home on Saturday to play the Foothills Bisons at the Taber Arena at 8 p.m.