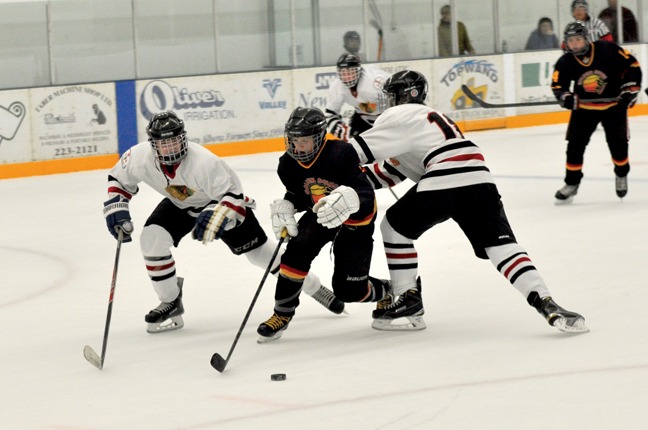 With some unexpected cuts coming from “AAA” teams, Taber midget “AA” Golden Suns head coach Duane Nevil feels like a kid at Christmas with how his squad is shaping up for the 2014-2015 South Central Alberta Hockey League season.

“The team right now has tons of speed. This is the fastest team I’ve ever had. It just happened to be Lethbridge (AAA) cut a lot of out-of-towners,” said Nevil. “There are a lot of “AAA” kids in “AA” this year. There’s a ton of talent on this team and I want to give them all the best year I can so they can get carded somewhere. Some shouldn’t be here, that’s a fact with how good they are.”

Fielding a roster of 17 skaters and two goalies, Nevil sees no real drop in depth right down the lineup card, even as a trickle-down effect will continue to happen a couple of weeks into the season from ‘AAA’ camps.

“This is probably the deepest bench I’ve seen in the last five or six years in the midget program. With seven defence and 10 forwards, it’s the deepest I’ve seen,” said Nevil. “You can roll three lines anyway you want, it’s just some have a little more scoring punch than others. (Sunday) they kept dialing ‘er up and as they start getting chemistry they’ll get faster and faster.”

There can be all the talent in the world on paper, but as Nevil noted, the first couple of weeks of the SCAHL season will be tinkering with lines to see which players click best together as the head coach will serve as mad scientist in hopes of a 2014-2015 season to remember.

“It’s just a matter of finding the right fits and maximizing our potential,” said Nevil.
Taber midget “AA” Golden Suns kick off its 2014-2015 SCAHL regular season this Saturday with a road game against Okotoks Oilers.

The team returns home on Sunday for a contest against Bow Valley Timberwolves at 3:30 p.m. at the Taber Arena.

“It’s an exciting year for me and the coaching staff. I thought we were going to have an average to above-average team,” said Nevil. “I don’t want to jinx myself, but I hope we go a long way. I want to get a fan base built for sure.”

BANTAM: Taber bantam “AA” Golden Suns got off to a rough start to its 2014-2015 South Central Alberta Hockey League season with two lopsided losses at home.
The first was a 10-2 loss at the hands of the Wheatland Warriors at the Taber Arena Friday night.

Hayden Mack and James Halverson each tallied for the Suns, getting assists from William Wallace, Kolten Heins and Tanner Turcato. Carson Adams took the loss in net, surrendering eight goals on 24 shots. Dalton Demers came in relief and surrendered two goals on 20 shots.

The following night, the Taber bantam “AA” Golden Suns were blanked by Okotoks Oilers 5-0 at the Taber Arena in a game where the Suns were outshot 46-11. Dalton Demers took the loss in net.