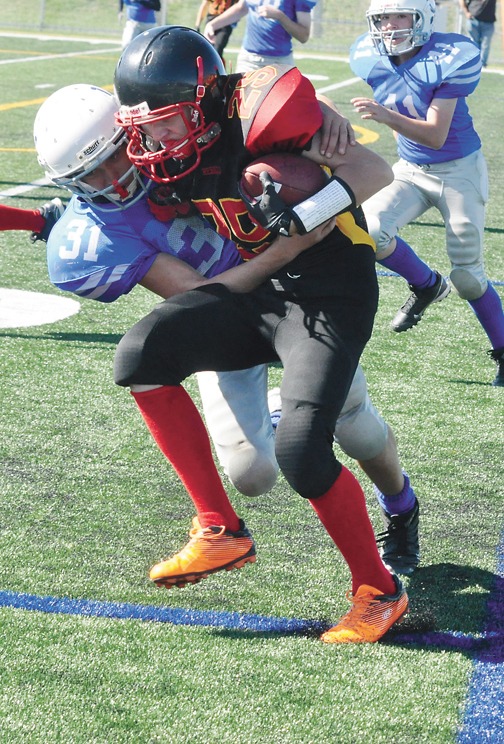 The Taber bantam Rebels football team got out to slow starts the first two games of the season — that wasn’t a problem Saturday in Medicine Hat.

It was a sign of things to come, as Taber scored early and often en route to a 45-0 victory on the road.

“We played well in all phases of the game,” said Rebels coach Garrett Simmons. “We jumped on them right away and never took our foot off the gas.”

Evan Harkness led the way with two touchdowns, one on a running play on offence and the other on a fumble recovery on defence, as the linebacker/running back also led the team in tackles.

Quarterback Mike Sawatzky also scored twice, as he capped off two long drives with short-yardage scores near the goal line.

One of those touchdowns was set up by a Sawatzky pass to Tylor Kornelsen, which set up the Rebels near the Colts goal line. Szigli, and Corny Froese had the other Rebels touchdowns, while Levi Tams booted three extra points.

“On offence, we really spread the ball around,” said Simmons.

“Lots of guys were able to touch the ball, and we were never forced to punt once the whole game.”

He credited the offensive line, which played without two starters, for stepping up and delivering a better performance.

“We made blocking a big emphasis after the Bulldogs game, and the kids responded,” said Simmons.

“We executed a lot better, gave our running backs some better lanes and protected the quarterback a lot better.”

On defence, the Rebels limited the Colts to a single first down, as Taber tacklers swarmed Medicine Hat ball carriers the entire afternoon.

“They didn’t have any space to operate,” said Simmons. “We did a great job disrupting what they wanted to do.”

Johnny Tams and Ben Kakuk recorded quarterback sacks in the contest, while Parker Karras and Tyson Lazco picked up fumble recoveries. Levi Tams also had a sack, which resulted in a fumble on the play.

“Our defence played with a lot of intensity and set the tone early,” said Simmons.
“The kids have to realize that is the way we need to play for four quarters, each and every time out.”

Simmons added the lopsided score gave the coaching staff the ability to tinker with the lineups on both sides of the ball and get quality playing time for everyone on the roster.
Rebels players and coaches will now have the weekend off, as Saturday’s scheduled game with Coaldale was canceled earlier in the year, when the Bears were unable to field a team for the 2014 season. Taber now prepares for a mid-week game on the road, Oct. 1, in Brooks.

“That’s going to be an important test,” said Simmons of the 7 p.m. game against the Roadrunners. “That team is undefeated so far and has looked pretty impressive. We should have a few guys back in the lineup for that game, so I’m expecting us to go in there and compete and leave with a win.”

Taber will then host the Medicine Hat Hawks on Saturday, Oct. 4.