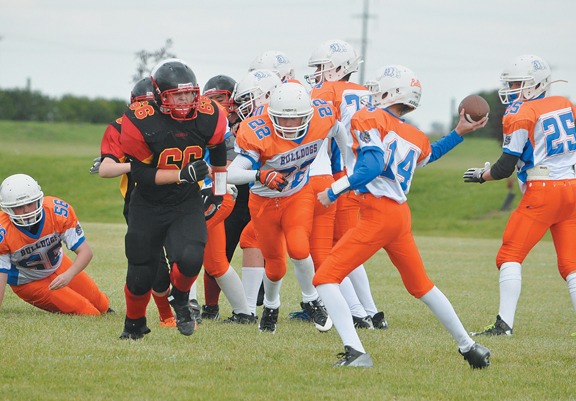 A second-half surge powered the Taber bantam Rebels Saturday afternoon as the team battled back to earn a 12-12 draw at home against the Lethbridge Bulldogs.

Taber trailed 12-0 at the half, thanks to two Bulldogs touchdowns on blocked punts. But two second-half touchdowns brought the Rebels back to help salvage a tie.

“We really showed some heart in that second half,” said head coach Garrett Simmons. “We had a number of kids beat up and hurt after the first two quarters, but the guys were able to fight through it and get the points when we needed them.”

Evan Harkness put the Rebels on the board with an interception, which he returned for a touchdown in the third quarter. Harkness then capped off a long drive in the fourth quarter with a touchdown run, and came within a foot of the endzone on the two-point conversion, which would have won the game for the Rebels.

“We were having problems all day with our long snaps on special teams,” said Simmons.
“We decided our best chance was to go for two and we came up just short.”

Taber was almost on the board early, as the first play of the game on offence saw Harkness race up the field for a long touchdown run, which was wiped off the board due to a holding penalty. Another penalty put Taber deep in its own territory, and led to the first blocked punt for Lethbridge. The Bulldogs blocked another punt for a touchdown in the second quarter for the 12-0 lead.

“Just like last year when we played them in the playoffs, special teams was our achilles heel,” said Simmons, who added defensively, the Bulldogs only connected for a few long gains. “We missed a tackle on a middle run they took for a lot of yards and they hit a couple decent pass plays but other than that, we shut them down.”

The Rebels offence had its opportunities, with plays set up to use the speed of Taber’s skill players but according to Simmons, a lack of effort stalled the team.

“We watched the tape and kids just didn’t work hard enough to establish much in terms of blocking. Our offensive line couldn’t get any push and our slotbacks and wide receivers missed some blocks that really would have made a big difference. The skill players have to realize, even if the ball isn’t going to them, they still have a job to do. When the shoe’s on the other foot and their number is called, and they’re getting hammered in the backfield because no one blocked, I’m sure they’re a little upset too.”

Getting everyone on the same page will be a point of emphasis this week, according to Simmons, who added when football is broken down, it’s a pretty simple game.

“It’s blocking and tackling, and who can do that the best each week. If kids don’t want to block, we’ll find someone that will, and they’ll get the lion’s share of playing time. It’s the same with tackling. We emphasize good, fundamental tackling and getting low and we’re still missing tackles with kids going too high and getting penalties for things like horse-collar tackles.”

That said, the coach added there are positives the team can take from last week, such as the strong second half and winning the turnover battle for the second game in a row. Aside from the Harkness interception, the Rebels also recovered four fumbles, as Wyatt Thurston recovered two, Colton Weinberger scooped up one loose ball and Harkness had the other. Thurston also registered two quarterback sacks.

One offence, Harkness led the team in rushing, and also hauled in a 23-yard pass, while Cory Froese and Tylor Kornelsen also hauled in passes. Michael Sawatzky helped his team tie the score in the fourth, as the quarterback connected on a few key passes and kept the drive alive with a scramble.

The bantams take on the Medicine Hat Colts Saturday at 1 p.m. in Medicine Hat, for the team’s first road game of the season.