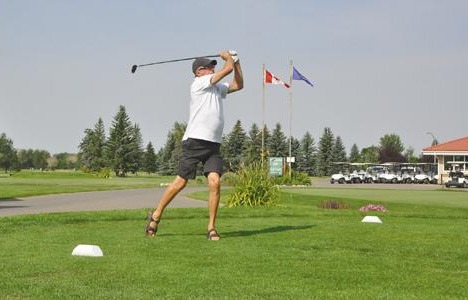 The senior club championships among the genders at the Taber Golf Club had plenty of subplots for 2014.

“My round of 73 is really good, 78, it wasn’t a great round, but it was good enough,” said Turner with a chuckle for the golfer who usually shoots anywhere from between 72 to 80 on the course on any given day. “My first round I had a lot more putts drop in. Putting makes a heck of a difference when you’re playing.”

When it came to the senior ladies’ title at the Taber Golf Club, Rose Gerlock simply thought she was already out of it after a first round of 100 on Saturday who usually cards in the low 90s on the course.

“I was 11 shots behind,” said Gerlock who roared back to shoot an 87 during her second round on Sunday.  “I was much more relaxed (the second round because I thought I had no shot in hell. I was comfortable and relaxed and that made a big difference. Golf is a mental game.”

A big difference indeed as the impressive second round gave Gerlock the senior ladies title by two strokes, which she won back in 2011 as well.