Pat Pyne calls it a day 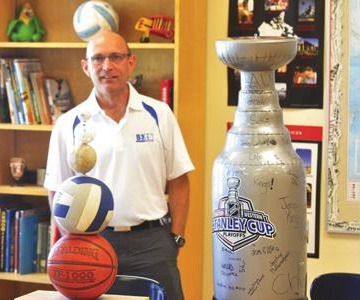 The halls of St. Mary’s School may be empty now with the passing school year, but it is an institution that will always fully be in Pat Pyne’s heart.

After 32 years at the school as a teacher, Pyne has called it a career where his love of the school is very much evident.

Choking back tears at times recalling some of his fondest memories, Pyne will leave a big void for the 2014-2015 school year by his absence.

“It has been quite a send off. If everyone could get a send off like this, they could be so lucky. I’ve definitely felt the love. It’s been nothing but thankful feelings I’ve got,” said Pyne. “I’m tremendously thankful for the staff and the administration. Mike Nightingale has been tremendous to work with over the last three years, from the students to the parents it’s a huge thanks.”

Going to university in 1977 in Edmonton, Pyne got his first—and only teaching position at St. Mary’s in 1982 where he called the school home ever since.

“I got an offer here and one in Cereal and one in Red Deer. Southern Alberta is where I wanted to end up,” said Pyne. “I was inspired by some good teachers I had and some good coaches who were a big part of my life. They were a big inspiration to make this a calling in my life.”

Pyne has indeed paid it forward just like those influential coaches of his past, as there was always a whistle around his neck for three-plus decades at the school, be it volleyball, basketball, track and field, badminton, and golf at the school, while outside the school he helped out with swim club.

“We are in the middle of a change here at St. Mary’s where I hope it’s not just a fad.

“We are in our first year of this flexibility project and this project has created such a nice atmosphere in the school.”

The flexibility project has allowed for some freedom.”

The flexibility project allows the student to decide what they want to do with their extra time if they have it. Flexible Fridays allows students ot build their own schedule.

“They know what the cores are with the meat and potatoes of what they have to fit in that day, but if they have looked after that and have extra time, they can spend it doing what they want,” said Pyne. “If they want to read, they can read, if they want free time in the gym they can have that.”

Whatever the profession, it is always tough to make that final decision of when to walk away from the day-to-day. A profession becomes who you are. For Pyne, he wanted ot get out of the education game while there was still some fire left in his soul for the profession.

“You like to pick a good moment and things have been tremendous the last couple of years. Classes and course load have been really good. Relationships with the kids and all the stakeholders involved have been really positive. The teams I have coached have been really fun to be a part of,” said Pyne. “I thought to leave with a good taste in my mouth. I’m able to go, my health is good, everything is solid here at the school, it’s a good time to go.”

You look at St. Mary’s School and there is very little staff turnover comparatively to other schools of like size. There must be something done right at St. Mary’’s School as its teachers continue ot want to be there as friendships have been built over the years. Pyne has taught all the cores at the middle school level along with some high school and Grade 6.

“We’ve never had a big turnover here at St. Mary’s over the years. When I came in, it was a young staff and we’ve all sort of grown up together. We’ve taught each other’s kids and helped raise and coach each other’s kids,” said Pyne. “It was a good place to raise a family and a lot of co-workers have become good friends.”

Those friends became a part of a Pyne family that was truly a St. Mary’s family as he taught along side wife Jacquie and had his son and daughter go through the St. Mary’s system.

“My best years were when the whole family was here,” said Pyne, tearing up recalling the years son Dan and daughter Katie were students. “In 32 years there’s going to be some disagreements, but it never carried over into school. Problems come up between teacher and student all the time, but kids are kids. When we were in school it was teacher/student and when it was on teams it was coach/player and at home it was parent/child.

” There have been coaching and teaching accolades along the way for Pyne in his three decade sin education, but it is those little differences that made the big impact in Pyne’s heart as he recalled some meaningful memories.

“Coaching and teaching accomplishments, the ones that stick out for me are the ones where there was a kid that was a marginal situation they were in,” said Pyne. “Every kid has potential and everyone matters. When you get a child where you can just see how something has transformed and become a contributor. Whether it was a contributor in the classroom  or the court, it’s a great feeling.”

An emotional Pyne gave these words of wisdom to young minds who are at the start of or may want to start a teaching career… “nobody cares how much you know until they know how much you care.”

“Jump in with both feet. It is not the type of profession that you want to do part time. It’s not a hobby type of thing. Get involved as much as you can,” said Pyne. “The benefits and awards are tremendous.”

Pyne is not completely waking away from St. Mary’s School as he will stay on as a coach of the St. Mary’s Auroras for the 2014-2015 school year as wife Jacquie continues on teaching at the school.