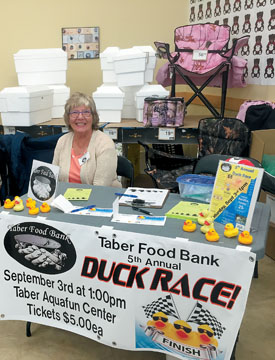 As Albertans continue to face inflation, more and more families will continue to struggle to make ends meet, but despite this, Taber does have a safety net in the form of the Taber Food Bank. Craig Hansen, of the Food Bank Board and Naomi Wiebe, manager of the food bank, spoke about how they support the community and how they were able to keep their doors open for fundraising. They started things off by reflecting on their first major event of the year which was the Coldest Night of the Year.

“We started the year good in February,” said Hansen. “We had the Coldest Night of the Year fundraiser and had support from the community. It was a good fundraiser. We have it coming up again this year.”

“On Saturday, February 25 is our Coldest Night of the Year again (for 2023),” said Wiebe. “So, we’re looking for volunteers and walkers for that.”

After discussing the Coldest Night of the Year, Wiebe and Hansen proceeded to discuss the ongoing vegetable garden.

“Other events of the year, we had a food drive and in June Stuff-a-Bus with the grocery stores — good support there,” said Hansen. “The community garden project brought in a lot of produce again.”

“The community vegetable garden did really well this year,” said Wiebe. “We shared produce from it all across the province. Some of it ended up in Leduc and up in Lethbridge. All over the place — all is good.”

From there, the two went into broad strokes highlighting some of the other fundraisers they have done throughout the year.

“Cornfest, the 50-50 was a sellout again,” said Hansen. “Another good fundraiser for us, also time to mingle and associate with the community. From their September door-to-door food drive, lots of support for people canvassing, lots of community support of people giving. December, we go back to another Stuff-a-Bus food drive at the grocery store. With support from the schools manning the tables and the buses, food is being donated there. Probably one of the biggest things is volunteers. Volunteers support us in all the activities. The fundraising, the door-to-door food drive, and the volunteers come in here every day and work.”

Finally, to wrap up the look back on the previous year, Hansen and Wiebe continue to comment on their volunteer support, as well as how the use of the food bank had an uptick.

“We have really good volunteer support,” said Wiebe. “We have volunteers that come in. They kind of select the day and they come in every week and they help us. We have some that come in and make sandwiches, and we have somebody come in and help organize, clean, or help make hampers. We really rely on them.”

“Usage is up,” added Hansen. “There are more people utilizing the food bank. The money we raise and the food that we bring in is going quicker.”

“We had good support this year,” said Wiebe. “It was a little bit slow for donations throughout the summer, but towards the end of the year, our community is really supportive and the value the food bank provides. We’re starting the year off on a good foot I think.”