Stuff A Bus a success for food bank 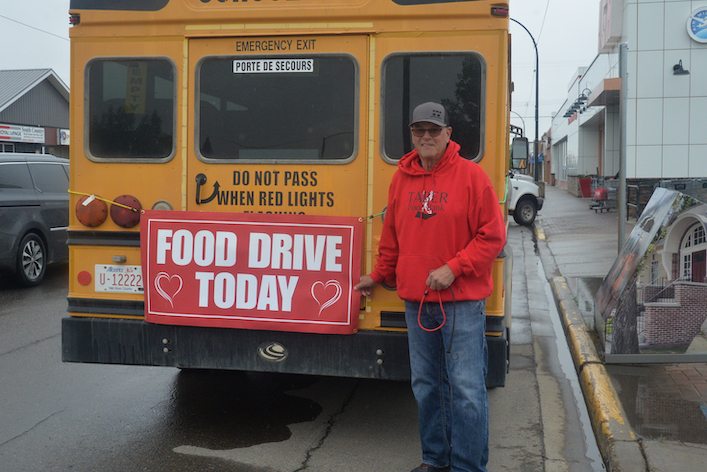 “Stuff A Bus went really well this year,” said Kevin Leahy, Taber Food Bank president. “We were very well represented by volunteers, all our shifts were filled up a week and a half ahead of the event, so that was really good to see, so really good support that way. We had 2,440 pounds from both of the grocery stores and that’s actually just slightly up from last year and the LDS Church in support of the event brought in 632 pounds of food at the same time so really, really well supported by the community.”

When Stuff A Bus came around last year, Alberta wasn’t quite in lockdown but as Leahy stated “It’s only really been this spring that people haven’t felt like they’ve been locked down. It was still kind of a weird time last year and we were unsure what we could and couldn’t do. If I remember, the weather was good and the grocery stores had us sitting outside for that event, so it wasn’t quite the same – this was more like the old Stuff A Bus from years ago and we’re really happy to be back at it again. We took in a little over $2,300 in cash donations at the event as well.”

June 7 was a bit of an overcast day for Taber, however, Leahy noted the weather cooperated quite well for the food bank, “and if the people who were volunteering there were able to take the grocery carts out to the bus as they filled up, they would. Otherwise, I would take them out to the bus. Once the bus began to get full, the fire department would come around and that happened three times that day to empty the school buses and take it back to the food bank. They had two different firepersons on the truck hauling stuff from the bus into the truck so it was a really great event.”

The event began at 9 a.m. at Taber’s IGA and Co-op and ran until 7 p.m. with volunteers donating their time to the food bank in two hours shifts. As far as events coming up for the food bank, July is an ‘exhale’ month for the members while August marks the Cornfest 50/50 raffle.