Taber Players takes to the stage once again 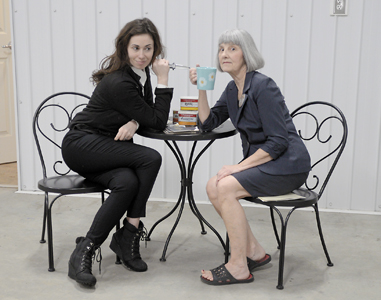 With Taber Players’ new spring production, Spirit Level by Pam Valentine having its opening night this Thursday at the Taber Legion, The Times reached out to the cast of this production to ask some questions, to get their views on the play, and to find out why people should come to see it.

The first question that we asked the cast was ‘who they are playing in Spirit Level?’

“I play an egotistical but very successful author who is in some way responsible for his own death,” said Mark Harding, the actor who is taking on the role of the ghost of Jack Cameron. “He has a lovely wife who tolerates his tantrums and has come back to Earth with him to save him from himself.”

“My character is Susie the wife, and I am quite flighty, but I am also somewhat smart. She believes in God and it’s very important to her,” said Patty Peronech, who plays Susie Cameron, the other ghost in the production. “I’m also bored and really want to escape where we are right now and I am looking for ways to escape.”

Harding added in, “but she wants to take him with her”, referring to his role as Jack. “That’s how devoted a wife she is.”

“I am Simon Willis, aspiring writer, expectant father,” said Emmett Campbell, who also elaborated on his feelings on the rehearsal so far. “I’m feeling really good, it’s really coming together. Doesn’t matter how big or small the show is, it always feels like it is a hodgepodge, it’s craziness right up till the last minute, and then, oh we still need to be working on things right at call, but I think we got this licked, I really do.”

“I’ve been cast as Guardian Angel who is from some distant place and comes down kind of in tither because she is extremely overworked,” said Sandra Kabatoff. “You know with all the cutbacks it’s pretty hard to get a guardian angel to come when you need them these days.”