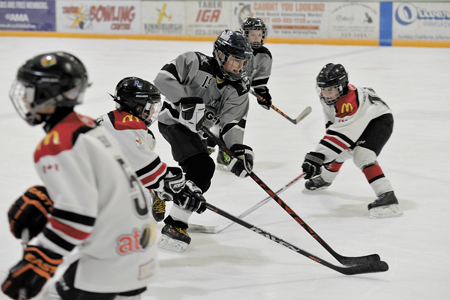 The U15 Oil Kings finished the regular season with a two-game homestand.

On Saturday, Brooks was in town and the visiting team collected a 9-3 win. Samuel Tolsma had all three Taber goals while Tate Nakashima had two assists, and Ryan Gray and Kylan Odland each had an assist. Avery Remfert was busy between the pipes stopping 52 shots on 61 attempts.

More goals came fast and furious on Sunday when Irvine came to town. The Oil Kings would jump out to a 7-3 lead after two periods, but Irvine would battle back in the third and close the gap. When the final buzzer rang though, the Oil Kings had a 9-8 victory in the bag. Tolsma was on fire again scoring a hat trick and two assists, Landon McEwen had a goal and three assists, Nakashima had four assists, Gray had a goal and two assists, Lincoln Wiest had two goals, Wyler Langhofer-Krahn had a goal and an assist, Evan Untereiner had a goal, and Konnor Wiebe and Nathan Rijkens had an assist each. Ty Dorin was the starting netminder and the goalie made 42 saves on 50 shots.