From boxing ring to the squared circle 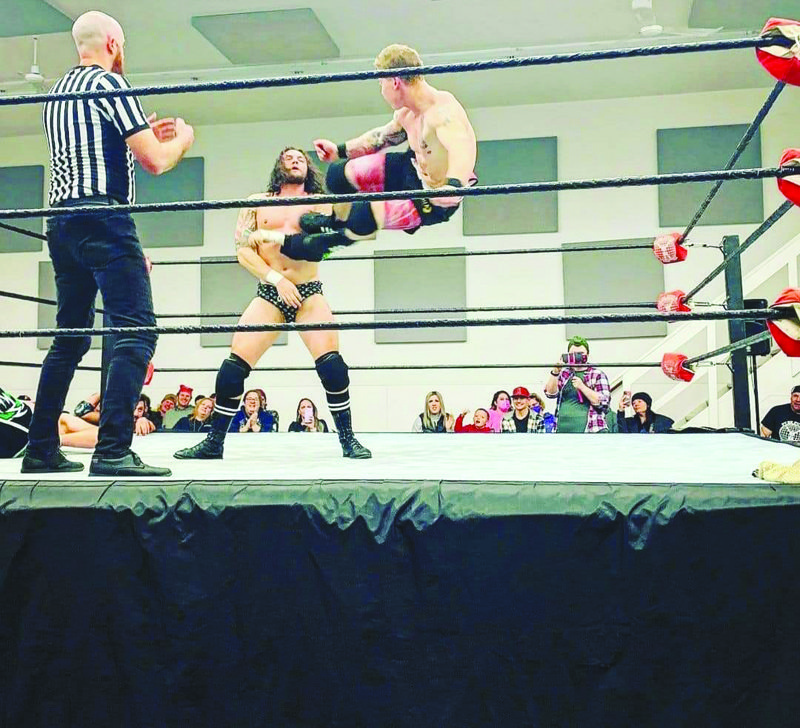 While Joel Mills’ boxing career is well storied, the Taberite has found a new passion in the ring — professional wrestling.

In mid-November, Mills squared up at the Pure Power Wrestling Throwdown in Taber alongside Dewey Robson for a match against Sydney Steele and Tyler Knox. Mills said the match was a long time coming and he had been anxious to get in the ring for quite some time, but the COVID-19 pandemic delayed his entrance.

“I ran into my tag team partner (Dewey Robson) and I said to him ‘I want to be involved in this, get me involved in this somehow.’ That is where we kind of ended it. They were having the show in Taber about two years ago and he called me the day before the show and was like ‘we want you to do a skit where you get bumped into Sydney Steel and you steal his belt.’ So, I was like ‘sure, let’s do it.’ I showed up, did the skit, and knocked him out, stole his belt and the crowd was amped up, which got me amped up. I jumped on the microphone and said ‘I’m in for a tag-team match with Dewey.’ I was learning how to wrestle and I was training for a match last year, but then COVID came,” he explained in an interview with the Times. “I trained a lot last year, but COVID hit and the show never happened. The dream kind of died there and then they asked me to do another thing at Cornfest this year. When COVID hit, I thought ‘I’m out of training and I don’t really know if I want to do this’, but then they asked me to do the thing at Cornfest, I did it, and then I committed to another match on November 29 and we did it.”

While he’s no beginner when it comes to training, Mills was entering into an entirely new arena with pro wrestling. After a few months of training, he said there were some similarities and some differences when it comes to getting ring ready.

“It was everything I could have asked for out of the experience. I was super nervous because I didn’t know if I would be any good. Boxing and wrestling training are different in the sense that, in boxing when you’re training, you train like it’s an actual match,” he said. “So you spar and you know exactly what you’re going to face in there — you know exactly what you’re walking into, even though you don’t really know what’s going to happen, you know what the tools are. With wrestling, we worked on the mechanics of the moves, but we really weren’t sparring.”

Looking at his first match, Mills has nothing but positives to speak of. Learning from the ground up was something Mills wasn’t used to, but overall he says the experience of becoming a beginner was exciting.

“It was super neat and I can’t even explain how much I enjoyed being in the ring and being a beginner again. It was so much fun because it was like a brand new experience all over again. The training is really hard on your body. It’s basically as hard as boxing was. I walked out of there just as sore, maybe less beat up, but just as sore. The difference is in boxing you’re fighting an opponent and in wrestling, you’re kind of just fighting yourself. The harder you go and the more you commit to moves, the more it will hurt and the better it will look. As I was training, I always kept that in the back of my mind.”

Despite fighting in major fights, including one at the Playboy Mansion, Mills’ first wrestling match came with some nerves. Even though he was prepared, he did mention the fact putting together a wrestling match was far different than game-planning for a boxing match.

“In the back of my head, I was like ‘I have to put this together in real time’. I was super nervous and it was the closest thing I’ve found to the thrill of a boxing match. The crowd took over and I went into my zone like I did when I was boxing. It turned into such a cool night and experience,” he continued.

One wrestling contest may be under his belt, but Mills is aching for another go of it.

He’s already got his wrestling name and signature move in the works for when he steps back in the ring.

“I suplexed a guy and then I punched him and he was finished off by my tag-team partner Dewey Robson’s the ‘Dew Drop’. I don’t have a secret move yet, but I have the name. My wrestling name is Hot Tub Tony, so my secret move will be the Chlorine Burn,” he explained. “After it being such a fun experience, I’m definitely going to be back in there. I think the way I’m going to play this is by being the hired gun. When they reach out, I’ll probably say yes. We definitely have to do more because it was so much fun. I think we could do a bigger promotion of it out here for sure and the kids love it.”

While wrestling may be a new passion, Taber’s boxing stable is also being looked after. Despite COVID-19 delaying several things for Mills from a boxing perspective, he’s excited at getting a new boxing card in front of the Taber community.

“Right now, I definitely want to get back to doing the promotions as soon as possible,” he confirmed. “I’m in the rebuilding stages of my boxing gym right now. Once I have a solid venue and a proper boxing gym built, it will be right into planning the next promotion. Hopefully, by spring or summer, we can do one.”