The Taber Cenotaph: The true story of Thomas Hunter Love 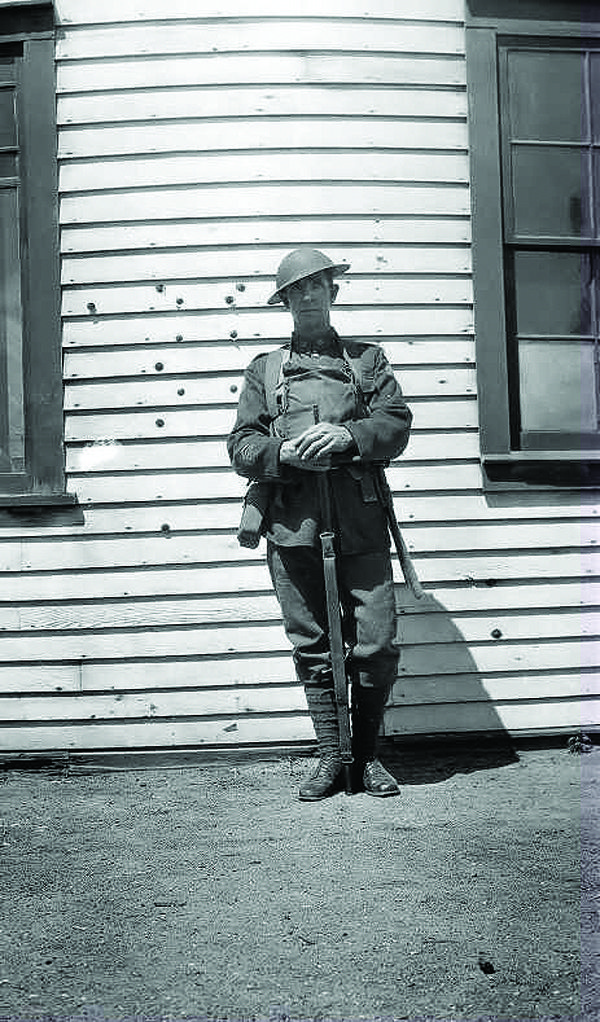 Submitted by Carmen Cundy
For the Taber Times

I am honoured to be able to tell the story of the man whose features are carved in rich Italian marble atop the Taber cenotaph. He is a soldier who is a symbol of the sacrifices of a generation gone, but not forgotten. This soldier was my great-great grandfather. Thomas Hunter Love was a man of bravery, a man of determination, and most of all a man with a great love for his kin. The following story comes from a place very dear to my heart.

Taber, a prairie town known as the “Corn Capital of Canada” is home to a recently restored and rededicated replica of Canadian soldier Thomas Hunter Love. Thomas is memorialized for his contributions in WWI, but to Roberta Odland, David Lacey, and Deb Rettschlag, he is simply just “Granddad Love.”

“I tell people who are there with me that’s my grandfather, and I am astounded by the reactions I get,” said Odland, who tries to attend the cenotaph each Remembrance Day in honour of the fallen.

The “Love statue” holds great significance for the town of Taber, according to Odland, and each year, young and old alike converge at the cenotaph wanting to know more about the soldier carved in Italian marble. Thomas Hunter Love was born on Feb. 18, 1888, to Francis Love and Georgina Gray in Buckhaven, Fife, Scotland.

Formerly a thriving seaside port town, Buckhaven developed into a mining town in the 1800s.

At just 10 years-old, Thomas worked in the Buckhaven coal mines developing skills and perseverance that would serve him well in the years to come. Following in the footsteps of his forebears, Thomas worked on a North Sea fishing fleet as a young man. It was the last of the four-mast, square-rigged sailing ships of the time, according to Lacey.

During Thomas’s first trip out to sea, he was ordered to climb up the rigging to the top of the mast, but his sea legs got the best of him, and he fell off the mast into the North Sea. No time was wasted, as Thomas was “fished out of the drink,” given a ration of rum, and was sent back up the mast to set sail.

Thomas grew to love the water and was an avid swimmer. He placed first in a Buckhaven swimming race as a young lad, which consisted of swimming two miles in the North Atlantic.

The prize for first place was a bottle of Scotch whiskey, which his father Francis promptly confiscated from him. Lacey recalls his grandfather saying he wished he had won second prize, because at least then he would have been able to have some of the chocolates.

Thomas married Isabella Mackenzie on Sept.. 19, 1907, in his hometown of Buckhaven, Fife. A week after the wedding, Thomas took heed to the urgings of a sign that read, “Go west young man, go west” and departed Great Britain to start a new life in Bow Island, Alta, Canada. Thomas worked with his brother Robert for the South Alberta Land Company until he was able to get homestead rights.

In 1911, Isabella and four-year old Nan arrived and settled in Taber on land across from the provincial park, next to the Old Man River. During the years that followed, Thomas worked off and on at the home ranch, and spent winter months in the Taber coal mines.

On Oct. 14, 1914, life changed dramatically for the Love family when Thomas joined the army. During his time in the 2nd and 3rd Canadian Mounted Rifles (CMR), Thomas demonstrated great strength of character and bravery. Thomas was tested in the trenches when his superior British officer (who he did not see eye-to-eye with) was drunk and was getting soldiers killed due to his inebriated state. A man of great conviction, Thomas knew what he had to do.

“He cold-cocked him and took over the command,” said Lacey.

This was an act of brave rebellion that would result in Field Punishment Number One (FP1), or more aptly named “crucifixion at the wheel.” This punishment consisted of a soldier being restrained to an artillery with little food or drink for long periods of time. In Thomas’s case, this punishment lasted for 28 days, according to Lacey.

This wasn’t the end of Thomas’s hardships, either. Thomas was left for dead in the trenches when an exploding shell caused a bridge to collapse on him leaving one half of his chest and arm pinned underneath. He was found clinging to life three days later and was left with injuries that would plague him for the rest of his life.

“He came out of the war not right,” said Lacey. “It had devastated him.”

By the end of the war, Thomas and Isabella had each lost two brothers, including Thomas’s brother Robert. Lacey recalls looking at photographs of the family after Thomas had returned home from the war. Their faces looked haunting, and their eyes were dark. In one particular photograph, Thomas’s fists were clenched so tightly that they resembled “two hams,” said Lacey.

“Back then they called it shell shock, but I think he had PTSD,” he said.

According to Lacey, Thomas came back from the war with a hatred for guns, and a love for the drink.

“Thomas had a tough life and made mistakes, but he was a good man,” Lacey said. “His family was the key to his life.”

Together, Thomas and Isabella had 10 children: eight girls and two boys. Shortly after celebrating their Diamond Wedding Anniversary, Thomas is cited in Silver Sage: A History of Bow Island.

“We celebrated our Diamond Wedding Anniversary in 1967, and I still think I married the best woman in the world.”

Each of the grandchildren recalls special times with their grandfather. Many of which include Thomas taking the grandkids chokecherry picking, making “chips” served in newspaper (the Scottish way), his love for gardening and nature (especially the bachelor buttons and daisies that grew all around the Love home), and the Scottish terriers that Thomas raised for pets and for sale.

Rettschlag recalls a time when she and her father, Frank Love, had gotten up very early to sneak into Grandma Love’s strawberry patch. They had just come in to enjoy their loot when standing in the kitchen was Thomas Love, with a smile on his face. He whispered to them that they better not get caught, as Isabella would be on the war path. Isabella stormed into the kitchen, and scolded them all, “Ye better no be eating me strawberries from the garden,” she said in her Gaelic brogue.

“I thought we were really in for it but looking back I think she knew what we did and was just bluffing,” said Rettschlag.

According to both Odland and Rettschlag, Thomas was a real joker. Odland’s favourite antic was when Thomas would tip the family cat upside down, position its body half under his arm, and take its tail up with his other hand. Thomas would hop around from foot to foot making “the darndest twangy/yowling sounds” while pretending to play the bagpipes, said Odland.

“No, never goodbye, just so long,” he would say with a smile and a wink.

Thomas Hunter Love passed away on Aug. 18, 1971. Odland said a final goodbye to her grandfather on his hospital bed, and this time he did not correct her.