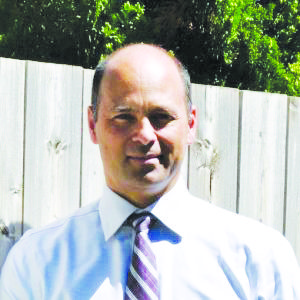 Fall is a season of change — where green leaves turn to yellows and reds, and here in southern Alberta, people hunker down and prepare for the winter ahead of us. This year is special. With the municipal election over and new faces on town council, Taber also has a new face in the position of Chief Administrative Officer (CAO).

Derrin Thibault is the new CAO for the Town of Taber, and while he said his time officially being a CAO is short — he has no lack of experience.

“I have about seven months of CAO experience through the Town of Redcliff. However, through my 16 years of municipal experience, there were lots of times when I was not in a CAO role, but an advisory role. Recommendations, navigating legislation and purchasing, so while I wasn’t a CAO, I did an awful lot of the same activity. I’d say around 75 per cent of the skills I learned still landed within the CAO role,” commented Thibault.

Thibault mentioned how he tries to stay away from actual politics as much as possible, but he has definitely interacted with council more in the past three years with his director job in Redcliff — and now CAO job in Taber.

“Previous to that, I was in the City of Lethbridge as their purchasing manager for the last five years before I left (for Redcliff). In Lethbridge, there was a fair bit of interaction with council which happened typically through the city manager. When there were some procurement-related questions around vendor selection or dispute resolutions through the city manager, I would deal with politically charged questions.”

Within the Town of Redcliff, Thibault worked as a director of Operations for the last three years before transferring to his CAO role. A job which, “Looked after really anything that moved.”

“Community services, parks and recreation, water treatment, landfill, the fleet department, bylaw services, and I was a liaison for the RCMP folks so, between Redcliff and the City of Lethbridge, I’ve touched on most of the services that Taber has to offer.”

Thibault echoed the election season has been crazy, and while he has only sat on two sessions of this current council, Taber and the administrative staff have been very good to him.

“I think that there are some activities that happen during election time that don’t regularly happen during the regular course of business. Everyone has been very welcoming, very open and trying to provide as much information as they can. Historical knowledge is also very important, so I’m trying to sponge up as much as I can sponge up and then we’ll see what will happen when the guards change hands.”

Thibault stated honestly that when he left Lethbridge to seek a director role, he was always trying to get himself positioned for a CAO role and he’s very happy that Taber will have him.

Redcliff is a smaller town population-wise than Taber, but Thibault insisted that it doesn’t curb his love for working in small towns.

“Lethbridge is a fair bit larger than Redcliff and Taber, and within a smaller centre, I have the ability to know a whole lot more about almost everything in a town this size and that’s really attractive to me,” explained Thibault.

“Lethbridge, I would never be in a position to know what is going on anywhere at any point in time. The Town of Redcliff is kind of the same thing and it just happened that they wanted me in a director role there. I like the smaller centres because you can make very well informed decisions because you know almost everything that’s going on and every facet of the organization and that’s really what I like about it.”

In any interview, it’s always hard to gauge what your interviewer is looking for in you; and if you’ve said the right or wrong things. Which is a sentiment Thibault noted he experienced when first meeting the council.

“The real unknown is the interaction with council members. In the interview process, you’re always a little nervous. You don’t know their personalities and you aren’t 100 per cent sure what they like, so it’s nice to be able to be my regular self, and not have to be something different in front of council members just because they’re elected officials which is very nice. They’ve been very good as far as down to earth, real talk, real speak type of people and that is sort of what I was hoping I would experience. It’s kind of nice that it’s not extremely official.”

“I’ve been a southern Alberta guy my whole life. Most of the time was spent in Medicine Hat and Lethbridge. I like southern Alberta. I do go where the job is though, I didn’t move to Lethbridge because I love the wind, and I didn’t move to Medicine Hat just because it’s the sunniest place in Alberta. I just go where the job takes me, and I see myself sticking around here as long as folks will have me.”

Thibault thanks Taber and the town council for this opportunity despite knowing he’s new to the title of CAO, and he hopes that he can produce everything the town is hoping for.