Taber — a ‘get it done’ kind of town, as evidenced by new Westview playground 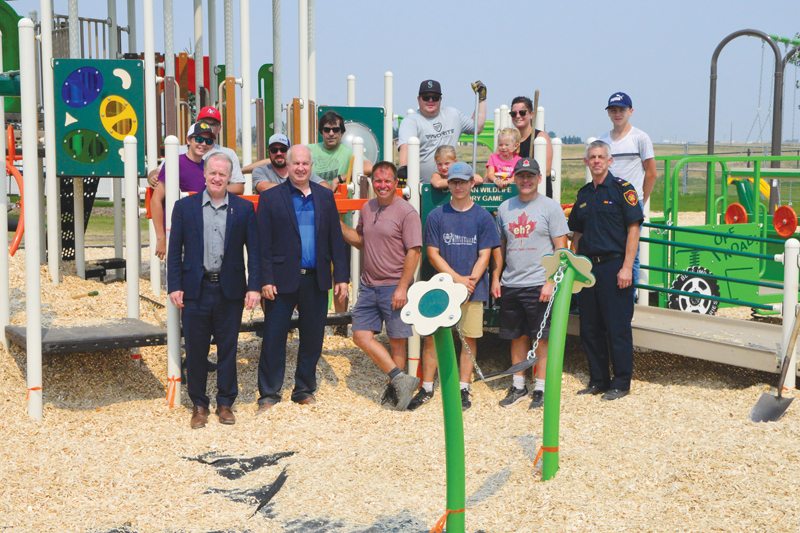 Despite the nearly unbearable heat that bombarded Taber in July and August, a new playground was erected in Westview Estates during that time.

The project included 50 different volunteers and clocked in around 400 volunteer hours over five days.

“It was a community grassroots movement,” said Bruce Warkentin. “The movement got us in contact with Tod (Pickerell) and the Kinsmen to bring this to reality. It wasn’t anything the town or Kinsmen wanted to do; it was a movement by a community that said ‘there’s a need here.’ The families living in that area didn’t have access to a playground that wasn’t six blocks away. There’s 170 homes there that didn’t have easy access to a playground for their kids.”

“It really does start with the residents,” added Pickerell, president of the Taber Kinsmen Club. “Once you can prove that need to the town or a service club; that’s the catalyst that gets it started.”

Warkentin noted Westview residents are a very good group of people and for that, they wanted to bring the playground to a reality.

“We went to Tod and a few other people, then asked the town if we could build it there. There may have been plans by the town to put a playground there in the future but there’s a lot of steps to go through with that and it may have been many years in the future. All the families that are there now may have had grown kids by the time that happened. So we began doing bottle drives and went to certain groups until COVID hit and everything ground to a slowdown. That was when we went back to the town.”

Pickerell added they also applied for the CFEP (Community Facility Enhancements Program) but the application was denied.

“Not because it wasn’t worthy, but just because during COVID there was limited funds and somethings just don’t make the cut. That was when we decided to re-apply and it was at that point that we couldn’t have completed the project without the grant. However, it would have taken a whole extra year if we applied and didn’t get it, so Bruce and I went to council and asked if we could get the money the grant would have offered us — just so we know we could have moved forward. They agreed to that and it ended up working out perfectly as the site ended up being a lot more work and expense than we initially thought.”

It is also important to note that while the park was built by a volunteer effort — it is still town-owned.

“They didn’t give us the money just because, but because they’re investing in a project that is going to be a benefit to the town and going to be used within the town for years to come,” said Warkentin.

With all of this hard work, and all of the help that was involved to bring this all together, Warkentin mentioned there is some important messages to take away.

“Its not that Westview Estates got what they wanted. It’s that if a community comes together and wants it to happen, they can work with groups like the Kinsmen to make it a reality. Anybody, if they’re passionate and enthusiastic enough, can get this into their own community because there are funding sources out there to make it happen. Get your community together, do some bottle drives, show that you have the support of the community and show your invested interest and you’re more likely to be successful.”

However, even with all the volunteers, they couldn’t have done it without the generous in-kind donations of several companies in the town of Taber.

“One of the real benefits of our Kinsmen Club is we have a wide-range of individuals involved,” Pickerell noted. “We have a carpenter who’s been involved in projects like this and we have another in a dirt-moving business, so he has the equipment and the expertise. Having our club involved made it so we could possibly get materials for free or at a very discounted price just because we have those good relations. They don’t want any huge pats on the back and we say thank you as much as we can, but I think it’s important to recognize businesses like that because they might not write a cheque; but the in-kind donations allow us to save a lot.”

“We have a long tradition of rolling up our sleeves, getting our shovels out and getting things done. That’s why I love Taber. We’re just a ‘get it done’ type of place.”

Westview residents would like to thank the Taber Kinsmen Club, the Taber Community Action and Prevention Society, the Community Foundation of Lethbridge and Southern Alberta, the Taber Firefighters Association, the Government of Alberta for their CFEP grant, the Town of Taber, and some anonymous individuals for their financial contributions for the playground.

The group would also like to thank everyone from the community who helped make the playground possible, including the numerous other individuals for their in-kind donations.