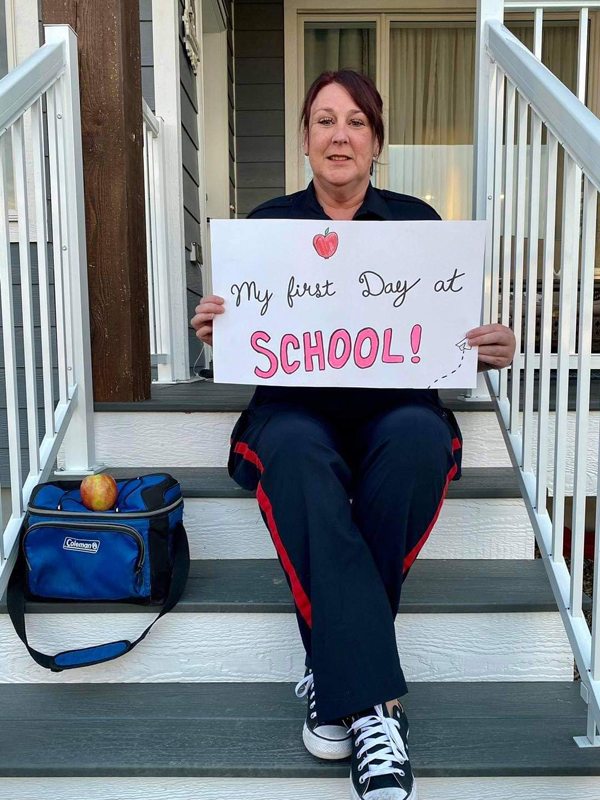 Another school year has dawned and with it comes a season of many new beginnings as another chapter of life is turned to. For Senior Cst. Juanita Fudge it is a time where she, herself, gets to go back to school.

Fudge is succeeding Cst. Chris Nguyen as the new school resource officer for the area; covering 11 schools and rotating through them throughout the week.

“It (policing) wasn’t something that I always thought about doing,” noted Fudge. “I was a librarian for 14 years and I felt it was time for a change. It was a big change to go from a librarian to a police officer, but my kids were a little older and I took interest in policing. The ball rolled and here I am.”

Fudge says the feeling she’s helped somebody when they were at their lowest and made a positive impact is one of the most important things to her. She’s also ecstatic at being the first female SRO for the area.

“I can already see myself making that connection with the younger females in the school, and showing them that they can have whatever job they want. Policing was mainly male-dominated, but females are coming up quickly behind, and I think for the females in the school I want them to see that there are strong women making a difference. I have had many positive role models in my life but none related to my profession. I hope I can be that role model for younger women.”

As it stands, masks in school are not required, but they are practising precautionary measures. Social distancing is still encouraged and there is hand sanitizing stations within the schools.

Fudge mentioned her biggest goal is to keep up what the Taber Police has already put in place for the program.

“It’s unlike other programs. A lot of other agencies don’t have this type of program in their schools so I want to keep up how well it’s been developed and keep that up in our schools. I also just really want to make those connections. A lot of time when police show up at your door when you’re a small child you’re afraid. We’re trying to eliminate that feeling of being afraid. We want to be visible and approachable,” continued Fudge. “It is very important to be visible. In the mornings when buses are letting out the students we’re patrolling and making sure we’re being seen. That we’re approachable and that if there is any problems they can see us. The same thing is with after school. Even when school is out we’re still on the playgrounds, we’re still doing those programs and we’re still going to be there to participate in the community.”

Being as it is a new school year, school zones are once again in effect. Make sure to exercise caution when approaching intersections, and always watch for pedestrian traffic.