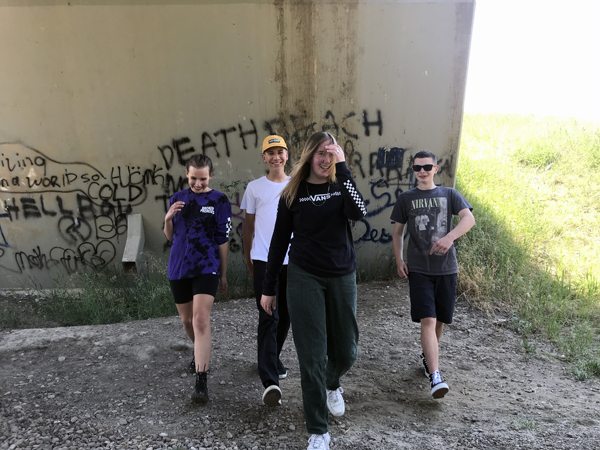 Since their last time playing Cornfest, Taber-based band Antifragile started playing with two new members, MacGregor Steele on lead guitar and Mariana Vorobiova on bass. While Katelynn Simmons, the vocalist of the group, admits they haven’t got as much time to practice as they would have liked because of the pandemic, she’s excited to get started re-developing their act and incorporate something new — as well as performing on the Cornfest stage later this month.

“We got Mariana in June and MacGregor a couple of months before that,” said Simmons. “We didn’t (practice) as many times as we would have done if COVID wasn’t happening. It’s always hard. Not even to mention the schedules of everybody.”

“During COVID, that’s when we were looking for a new guitarist and a bassist,” said Simmons.

“Our old guitarist left in August of 2019 and our bassist left the band the following September. So, we didn’t get a lot of practice in with a whole band for a while.”

“We’re just trying to have fun.”

According to Simmons, the former guitarist and bassist left the band because they were graduating and were looking to do other things — musically and employment-wise. With the new band members, along with original drummer Gavin Kinniburgh, Simmons and the band are interested in revamping their performance.

“We’re working on kind of revamping our whole set,” said Simmons. “A lot of the songs we’ve been doing for a really long time we kind of want to stray away from and bring something new in.”

Simmons also wants to practice performing in front of a live audience before the show at Cornfest.

So, the band has plans to practice at the Owl in Lethbridge.

“It’s a lot smaller scale, so it’s easier to pay attention to.”

To keep up to date on Antifragile, check out the band’s Facebook page.