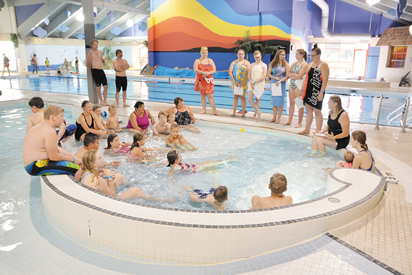 As August continues to heat up and events are being planned, Taberites get one more to look forward to as the Aquafun Centre gears up to celebrate its 30th birthday.

“Old infrastructure may not last, and different materials were used to build back in the day. We’ve had a lot of renovations to get to where we are and we’ve had people from all over southern Alberta come to us and say what a great, clean and pristine facility we have. It’s worth celebrating the 30 years. We even have patrons on the committee when the pool was made that are still enjoying the pool today.”

Fran Dogterom, one of the founding members of the pool, says the outdoor pool was on its last legs, so it was something that needed to be replaced sooner than later.

“An indoor pool can be used all year-round, so as a group, we thought it was worth making an indoor pool. For swimmers like myself, an indoor pool is better than an outdoor one because we come five, six days a week and even sometimes every day and when you get older your body doesn’t take all the other sports it used to. So, you have to find something less strenuous, and swimming is much less stress on your knees and bones.”

Ostrup also mentioned, with the pool being indoor — the town doesn’t have to do winterizing, so it makes it much easier despite the year-round maintenance, and being able to swim rain or shine.

“One of the things about the outdoor pool is with the amount of wind and changes in temperature in southern Alberta is many of those evenings and mornings could be quite cool, and as soon as you saw lightning that was it — no more swimming,” said Dogterom.

There will be door prizes to be won, and the town is aiming for a history theme for the celebration.

“We’re going to start asking people for their stories of best moments of the pool, and then put them up around the pool for people to read weeks after the party,” noted Ostrup.

While COVID-19 did close the building, things are now ‘business as usual’ since the July 1 opening of the province.

Ostrup added things are practically back to normal.

“2020 was fought, and people are excited to get out and have realized the pool is something they missed, so they’re taking the opportunity to come and swim while it’s there.”

Dogterom believes the pool is an important addition to Taber and area. “It’s something an entire family can do together, nobody sits on the sidelines. Learning to swim is a lifesaver, and you don’t have to drive a long way to have a nice afternoon or a birthday at the pool.”

The party will kick off Aug. 7 with the Taber Vipers Swim Club hosting a barbecue from 11 a.m. to 1:30 p.m. Speeches from Taber Mayor Andrew Prokop and a representative from the Eagle Spirit Nest Community Association will be held around 12 p.m.