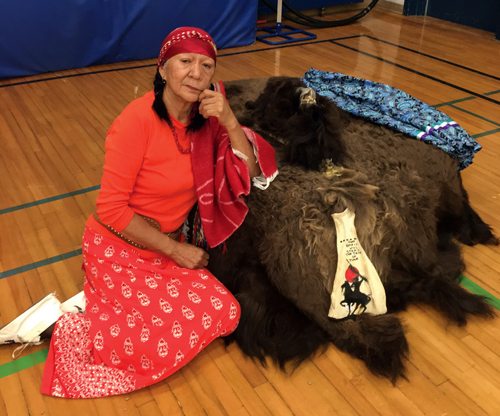 According to Greta Old Shoes, Blackfoot Elder and bundle holder of the All Tall People Clan of the Kainai Nation, the area of Taber was previously called “table” in the Blackfoot language.

“In Blackfoot it’s named iitáísooyo’p. That means table,” said Old Shoes, “there was an abundance of food back when Taber used to be a little town. A lot of our people used to go there to haul beets, sugar beets and stuff like that.”

“Somebody made the name and said it’s called ‘iitáísooyo’p’ for Taber,” adding, ”There was so much food you could just go and take what you want.”

Elder Old Shoes has been holding a bundle since she was about 10 years old.

Since then, she’s started teaching young students about Blackfoot Indigenous culture through the Seven Teachings program, Orange Shirt Day and answering any questions they might have, including questions about the residential schools.

“I lived a very strict life when I was younger,” said Old Shoes, “I try to remember what the old people told me.”

Because of this, Old Shoes says she has a unique opportunity. “I’ve been given the opportunity to work with the children. I have this knowledge. I’m a knowledge keeper,” said Old Shoes, “I might be a young spiritual person — but I do know the spiritual part, the bundle part.”

“When I was about 10 or nine years old, I received a bundle,” said Old Shoes, “since that time I had it for 35 years,” adding, “my parents kinda spoiled me.”

“Our purpose, Lisa and I, is to teach children about the cultural,” said Old Shoes, “we can’t really talk about the spiritual because it’s a really delicate area.”

“What I do before I go out is I’ll smudge myself and I’ll smudge (Lisa) so we can give the message to the children,” said Old Shoes, “we also talk about the teepee and they make their own little teepee. So, it’s hands-on,” adding, “I like to be hands-on with them.”

“The teepee represents the body in its own way,” said Old Shoes, “the teepee poles are made of, they’re like our ribs, if you feel your ribs they’re all delicately set up. Well, that’s like a teepee.”

“When you wrap the canvas around the teepee, you’re also wrapping the skin around your body.”

“We put the entrance to the east,” said Old Shoes, “to represent when we didn’t have computers and stuff like that.”

“When you close it up, you have the fire or the burning hot coals or what not,” said Old Shoes, “that fire is your heart. That’s why we go back into the womb. The teepee is like a womb.”

“We put the buffalo robe on the ground and we all sit in a circle,” said Old Shoes, “I like to go in a circle because we are all the same in a circle.”

Old Shoes says the program was started as a way to repay Lisa Sowinski, Indigenous liaison with the Horizon School Division.

“I lived in Taber when my kids were going to school,” said Old Shoes. “One winter day I thought ‘Oh my goodness, it’s snowing. You don’t have to go to school,’ and here comes Lisa — blizzard, into the big four-by-four, banging on my door, and I’m like, ‘Who is this woman banging on my door?’ It was Lisa and she’s happy and just joyful.”

“I had to get the kids up to go to school, thanks to Lisa for being there for me,” said Old Shoes, in return, Old Shoes offered to be a part of the program “when they had started that reconciliation, and they finally put the books out, and they are going in-depth with the residential schools.”

Old Shoes says she brings a buffalo head, buffalo robe and some moccasins “to show children at a young age what they’re about to go through.” Moreover, Old Shoes says she does a “blanket exercise” with the students. According to Old Shoes, it’s a skit played out with students, and teachers reading and writing about “how the land was taken, what happened in history, and what’s happening right now like the Orange Shirt Day.”

“There’s many stories (about Orange Shirt Day),“ said Old Shoes. “But the one I really like I heard is, it was a little girl with her mom and dad and the people had come and told the parents ‘she’s gonna go to school and she’s gonna have clothing and she’s gonna be fed and on the weekend, she can come home.’”

“So they fooled her,” said Old Shoes, “before she left her home and she was so happy she was going to school she grabbed her favourite shirt, her orange shirt.”

“As soon as they went in they took her clothing, they cut her hair and said she had lice,” said Old Shoes. “She came out of the residential school, broken, but she still mourned for her orange shirt.”

Old Shoes says there were Grade 4 students at a school in Taber that asked many questions about residential schools and reconciliation.

When thinking about residential schools, Old Shoes says it was a dark time in history.

“You can’t blame yourself. I don’t blame myself and I hope no one blames themselves.”