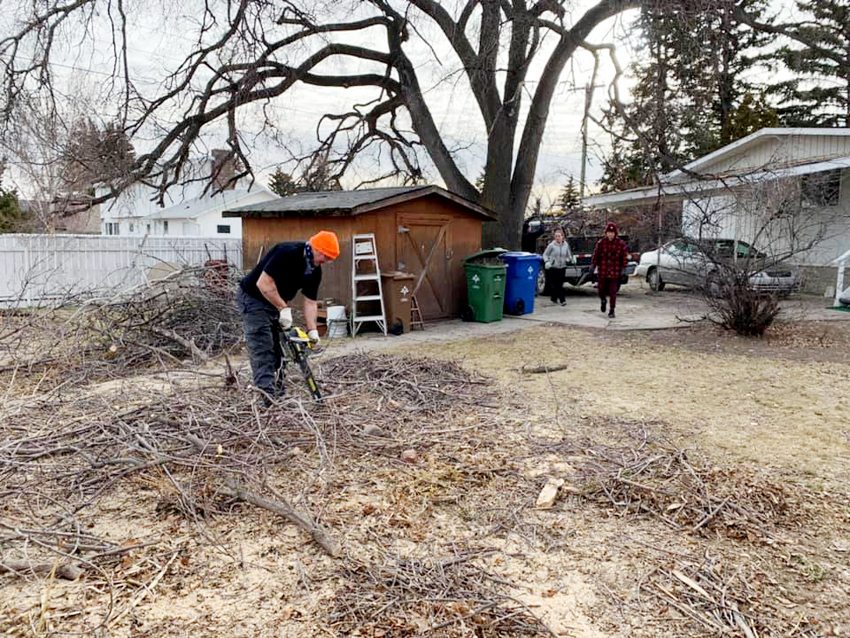 Taberite Kristin Skiba said after the job she saw completed recently by a number of volunteers that jumped into action when a call for aid was put out, “my heart is bursting with pride for some incredible members of our community.”

Earlier this month, after a southern Alberta wind storm caused power outages, blew off roofs and uprooted trees — Skiba drove past a house that still had a tree on it that had fallen during the windstorm five days later.

“So, I stop at the house, knock on the door and wait for someone to answer. A nice, small-statured —older than me lady comes to the door, Mary. I ask her, ’is someone coming to take that tree off of your house?’ and she replied ‘no, we haven’t been too sure who to call or what to do, maybe my brother will go on the roof and cut it down in pieces,’” noted Skiba.

Skiba was not going to let the woman’s brother go on the roof. “I know him. I know he was an acquaintance of my grandpa and there is no way he should be climbing on a roof to cut down a big blown over tree by himself. I tell the lady I will take care of it. I will put out a call or a public ask for people that could help.”

And three minutes is all it took asking if anyone had the skills, manpower, equipment, know how and time to help. “Until I received the first offer, then another, and another.”

After the first call-out to the community, Skiba had 14 people offer to come help — five picker trucks volunteered, three chainsaws, a flat deck and two businesses.

“The calls and messages were coming in so fast I could hardly keep up. I actually had to turn away help, if you can believe it — because there wasn’t enough room in her yard for all of the people and equipment that were offered,” Skiba pointed out.

Unbelievable Taber, Skiba added, “you should be so proud.”

After the initial call-out to the community, Skiba said eight people jumped right in and got straight to work. “The tree resting against the house was down before I even got there.”

Darryl Lee Reid with Reidco Anchor Services and his trucks helped out, and so did Darcy Firth and Boyd Crowson with Classic Hot Shot, who brought a flat deck and picker truck. Miles Jennison brought his chainsaw and muscle — while on his days off from work. Ed Osler, who would have been there to do the work by himself (if that’s what it took) got to work with another chainsaw cutting up the tree in the backyard that had taken out the power line. Richelle Lesley Lee Power jumped right in and started piling branches and filling bins. Ronda Anne also came and got straight to work raking, piling and cleaning up. And, Walker Skiba lifted logs and filled trucks.

“It went so fast. Trees were down, three all-together, trucks were loaded and tree trunks were sawed into discs within minutes. It was a whirlwind. Then came additional reinforcements,” Skiba continued.

Gill Younie, the owner/operator of Boston Pizza in Taber offered pizza for lunch, “if we were still there at lunch time and Dan Peters of DW Construction told Mary he could come fix up her roof,” Skiba said.

Skiba was utterly speechless with the giving and volunteering of time, effort, equipment, cost and physical labour. “The camaraderie between us and the smiles on our faces said it all — everyone was there to help.”

Skiba would like to thank all the volunteers that came out to help Mary. “Really, there are not enough words and I know Mary was emotional and seemed a bit overwhelmed people who didn’t know each other or her, and didn’t want money, were there to help her — a stranger. Strangers no more, I think we could all consider each other friends now.”