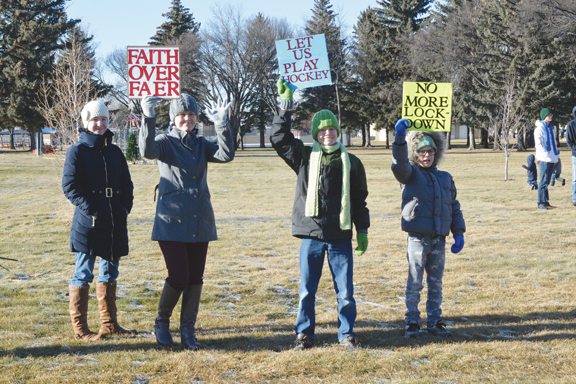 PANDEMIC PROTEST: Supporters of Taber’s new Anti-COVID Alliance hold up billboards on Saturday afternoon during a Freedom Rally at Confederation Park. The group is planning to hold similar protests on a weekly basis in the future. TIMES PHOTO BY TREVOR BUSCH

After the provincial government announced an extension of restrictions until at least Jan. 21, the alliance organized a Freedom Rally at Confederation Park this past weekend.

“When it was originally just masks and small restrictions here and there, the people weren’t too fired up about it,” said Rhett Anderson, an organizer of Anti-COVID Alliance.
“But once these lockdowns started, and we began to see the toll it was taking on small businesses, especially on social media — I would see a lot of people’s opinions shift to ‘this is wrong,’ ‘why is Wal-Mart and Costco still open, yet small businesses have to close.’ So, we started a Facebook page to see if we could get some support or see what the community was like, and it blew up almost instantly. We had 170 members within two days, so we decided to move ahead with this freedom rally and see if people would come out. Even if it was just me and my fiancé, we were prepared to do it and luckily, people showed up.”

While there was no way of knowing exactly how many people would attend, Anderson said he was happily surprised how many turned out to offer support.

“It was good, I was really happy to see that many people. I didn’t know what to expect. With all of the members, I thought it could be huge, but I thought people may not come out but I was really pleased with the amount of people that came out.”

As the provincial restrictions will be in place for at least a couple of more weeks, the group is planning to move forward with several more Freedom Rallies to continue to garner support.

On top of that, they hope to introduce some other activities in the Taber area.

“Every Saturday, we are going to try and do the same thing at Confederation Park. I hope the numbers keep growing and I’ve had lots of messages since the first one saying ‘sorry we couldn’t be there, but we’ll be there next time and we’ll bring our kids with us.’ We want to try that plus maybe get some activities in the town going again just to show people we can live a normal life again and not get hurt,” continued Anderson. “Jason Kenney and these politicians want to be politicians of the people, yet they know if these businesses are closed for another two weeks, it could finish them off. There are a bunch of businesses that opened (Jan. 11). This is pretty much the death toll for a lot of these places, so we really need to rise up now more than ever to help these guys out.”

“We have a Facebook page called Anti-COVID Alliance. You just have to request to join and we’ll add people. That’s basically where we post all of our events.”