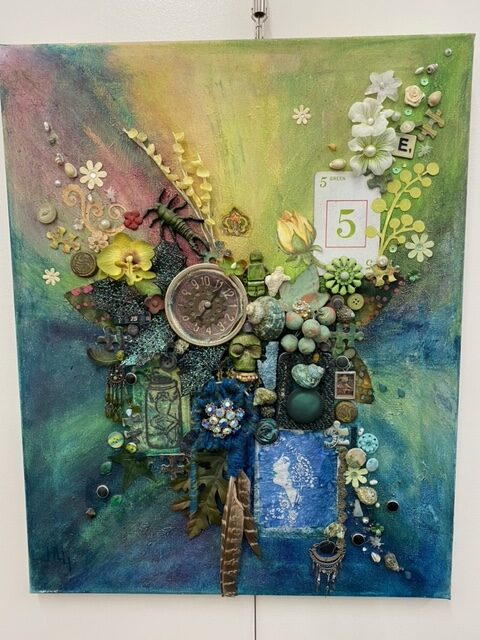 Featured at the Barnwell Public Library until the end of January, Halli Lilburn’s eclectic artwork is on display focusing on pop-culture themes and collage.

“A lot of it is found-object collage, so a lot of assemblage. It is kind of random,” said Lilburn.

Much of Lilburn’s found object collage pieces incorporate items that are of significance to her and her family’s history.

“There’s kind of two different groups. The one is a group of paintings that I did using things from my grandparent’s homestead. So a lot of antique trinkets, but also some nature pieces that I found just around the garden and orchard. Pieces of bark, brackets and things like that from the actual land, and things I found in the home as well, thread spools,] sewing implements from my grandma’s sewing collection, things like that, and I put them together. It’s like a monument to their homestead, and their life.”

Her other focus in the collection she has on display is pop culture, specifically comic book heros.

“There’s another section that are stencils of pop culture. So I did Wolverine and Deadpool, iconic comic book characters. They were kind of a separate show that I did when Kapow (Comics and Games) was open in Lethbridge, and I had them on commission there. Those ones are more superheros and the pop culture world. I have my own stencil maker, so you melt plastic and then use the plastic sheet as a stencil, so that’s how I put those ones together.”

Unfortunately access to the Barnwell Public Library is extremely limited due to to COVID-19 restrictions, but Lilburn is hopeful restrictions might be loosened in mid-January. Lilburn also puts in time teaching art classes.

“I’ve done a lot of comic cons, I like to handle my own business, craft shows, farmer’s markets, stuff like that.”

Her motivation for becoming involved in art is simple.

“Because I love it. I always think there has to be some deep, hidden motivation behind it, but it’s because I like it.”

Lilburn’s styles have evolved significantly from when she first put brush to canvas.

“Definitely. The best thing about art is to continue experimenting until you find your niche, and it takes a lot of trial and error before you find the way that you want to express yourself. I think that I’ve done that finally, but these pieces are definitely like my favourites.”

Depending on how important it is to you, and what your passion is, you can always make time for your art.