M.D. CPOs hoping to put an end to illegal dumping 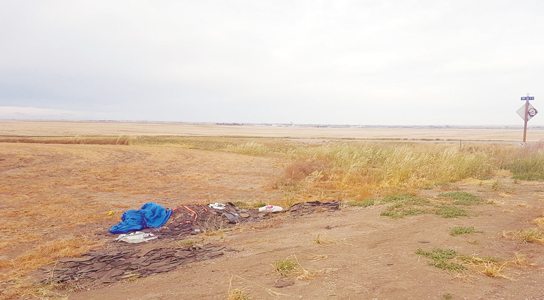 The Municipal District of Taber community peace officer program is continuing to try to combat illegal dumping that is happening across the municipality.

Plenty of active files are still being worked on by the CPOs and they’re hoping the continued discussion will deter any more of this activity.

“We’re having a major issue with illegal dumping. We’ve had about six files in Barnwell so the western part of our boundary,” explained Kirk Hughes, director of community safety and CPO sergeant. “What we’re seeing is some folks are hiring contractors who have usually been in front of the disposable sites and dispose of stuff properly either at the dump or a recycling facility. That’s what we want to see, some folks though, probably the ones without insurance are locating con- tractors that do the work and then promptly dump the garbage in the M.D. of Taber in our irrigation ditches, farmer’s fields and on the road even. The issue, not only because it is illegal to dump that stuff, but it’s expensive for us to take it all in and transport it to the waste facility ourselves. Also, they are throwing it in irrigation and drainage ditches which could cause backups and floods and ruin our infrastructure.”

The issue for the CPOs is they have a large region to cover so find- ing all the spots where illegal dumping is happening can become a challenge.

Finding it sooner than later is preferred for the CPOs and they are relying on calls from the community.

“If we can find it ahead of time, awesome because then we can get rid of it. But the last two dumps ago, by the time we found them, it had backed up one of our irrigation canals and water went over the road. Someone did call it in and it was underneath the culvert and it was stuck underneath there because someone thought it would be better to hide it so no one could see it. We’re getting some of that and the frustrating part is it damages our infrastructure and some farmer has debris in his field that he has to take off. They usually have nails and old tar paper so it’s bad for the environment and if an animal eats it, it causes some issues with that. Mostly, it is just ignorance. People can’t just throw their garbage out at the Taber dump. It’s like $40 to dispose of this waste but they’d rather save $40 by dumping it in the M.D. of Taber,” continued Hughes. “Mostly it is occurring in the south part of Barnwell. We have had garbage north towards near where the airport is but the last couple of files have been south of Barnwell towards Chin Lake Reservoir.”

If M.D. residents do notice any illegal dumping within the municipality, Hughes encourages them to call it in and the more information, the better.

“If they have it in progress, the best contact is still the RCMP and they’ll forward it down to us. Ideally, if it is safe, get a license plate number. You don’t have to approach them. We are working on one where they threw out the current shingle container they were using. You scan them and you pay for them but they threw out that plastic wrapper so we managed to scan it and find out who owned it. We’re now working on getting the contact information for who owned that, whether or not it is them, we don’t know.”

With winter weather and more snow inevitably coming in southern Alberta, illegal dumping being covered by snow presents even more challenges for the CPOs.

As many of the files have already noted the illegal dumping has been concealed and the addition of snow would further aid those doing the dumping and in some cases, Hughes could see more cases not being found until after the snow is gone.

“It’s a little complicated because there is only so much we can do as an agency but we just need it to stop. If people are that hard-pressed for cash, they shouldn’t be contractors if they can’t afford that. We’re talking $40, we’re not talking $400, it’s a relatively inexpensive cost to have a transfer station dispose of that properly. Our fear is, with the snow, there could be dumpsites that won’t be found and we may not find them until next year or when they back up one of our irrigation ditches. I just wish people would be a little more considerate to their neighbours,” he said. “If people don’t want to contact the police or the community peace officer program, they can make an anonymous report to Crime Stoppers. We just need it to stop. There is a bylaw and provincial charge for this, it’s not that expensive but ideally, we would prefer people just didn’t throw garbage on other people’s property, our ditches or on our roads because it causes an endangerment to life, and that is our major concern.”