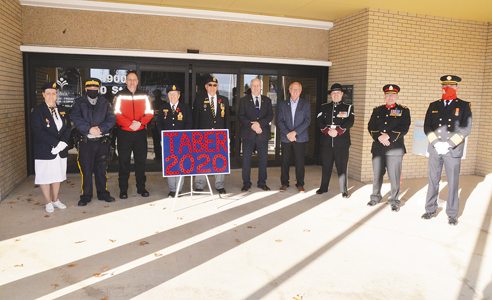 “The Taber Times has covered the Civic Centre (Taber Community Centre) Remembrance Day ceremony for years and because of COVID we are being conscientious and going to move it over to the cenotaph,” commented President Abe Andres.

The first plan for the ceremony involves 25 people and the public are welcome to come to Cenotaph Park to pay their respects.

“As a member of the Remembrance Services organizing committee, I am happy to report that we will be carrying on with a modified public ceremony this Remembrance Day,” said Chris Nguyen. “This year’s primary service will be held outdoors at the Cenotaph. Unfortunately there will be no indoor event at the Auditorium. The ceremony will officially commence at 10:55 a.m. with words of greetings, and a moment of silence at 11 a.m. There will be designated seating for veterans. The public is most certainly welcome and encouraged to attend as long as they comply with current AHS guidelines on physical distancing and maximum numbers for outdoor gatherings.”

The second plan that the Legion has come up with is in the event that the number of COVID-19 cases drastically increases here in Taber and it only involves 15 people. Along with the reduction in the number of individuals attending the ceremony they would also be cutting out some speeches, some of the wreath layers would not be present and they would not be firing the cannon.

To also help with the potential 15 person version of the ceremony some of the wreaths would be pre-placed and the flags would be pre-lowered before it begins. Finally, if the service ends up being cancelled either due to COVID-19 or bad weather two individuals from the Legion will lay out wreaths on behalf of everyone. If the Legion has to rely on either of their backup plans the public are still welcome to come to Cenotaph Park after the ceremony to pay their respects and lay their wreaths.

The Legion will be also streaming this event live via their Facebook page at http://www.facebook.com/TaberLegion

Also in an effort to minimize the risk of spreading COVID-19 the 225 Royal Canadian Air Cadets Squadron will not be joining the Legion at this year’s ceremony.

“Regretfully, due to the current health concerns, the Department of National Defence is not allowing any formal Cadet activities at this time,” said Nguyen, a representative with the local squadron. “This means no organized Cadets participating in uniform for any events including our usual Poppy Campaign in support of the Legion, flag laying ceremony at the cemetery or Remembrance Day Service. Friday marked the official launch of the Legion’s 2020 Poppy Campaign so between now and Remembrance Day, you will see Poppy boxes throughout our community at numerous local businesses. As usual, all proceeds raised will go towards supporting local veterans.”

“The consensus was that the situation for Legion branches in our riding is dire‚” remarked Shields following the meeting. “Many are barely breaking even and struggling to make it through the year without shutting down. Without traditional sources of revenue like poppy sales, Remembrance Day gatherings and the ability to rent their facilities, Legions are in serious trouble. The $20 million dollars allocated to the Royal Canadian Legion by the federal government needs to be distributed immediately — without the delay we have seen so often from this government.”

“I would encourage everyone to buy a poppy and donate to their local Legion if they can. Without our support, we may not have these pillars of our community going forward.”