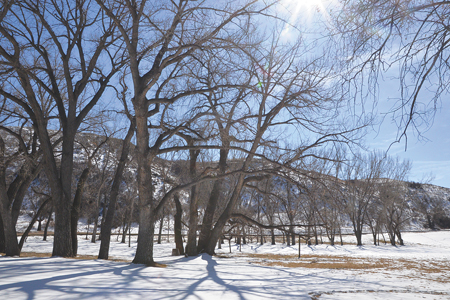 SUNNY DAYS AHEAD: Sunlight beats through branches in the M.D. of Taber Park in April. TIMES PHOTO BY TREVOR BUSCH

Budget implications in regard to firewood at parks within the Municipal District of Taber are going to be a talking point heading into budget season.

“Agricultural Service Board (has) been providing firewood for all the campgrounds within the municipality for years. A large cost associated with our campground is the cost of providing firewood at no cost to the tenants of parks around the M.D. of Taber,” reads the memo. “Last budget season saw an increase of $10 per night to the camping rates at the M.D. of Taber campground in lieu of charging for the firewood used within the park. There were many other parks left out of this price increase. Some under our control, some not under our control. It would be good to add other parks that utilize this great resource into the firewood discussion this budget season.”

Administration’s recommendation for council was to consider invoicing the local parks for a percentage of the cost of firewood with the rest being a grant from the M.D. to the park.

A three year average of wood consumed at parks would then equal $564,222 and wood is cut between December and March while working in the ditch and fence line of M.D. right of ways, with the amount of wood varying year to year.

“You see some fairly dramatic numbers. These are numbers we have used based on the last three years,” added Jason Bullock, director of agricultural services. “We’re trying to balance our budget lines between parks and rec and ag service board.”

It was also pointed out the amount of firewood needed for each park would likely decrease if campers were required to pay.

“The consumption of firewood, if it was actually charged for, I don’t believe it wouldn’t be the same usage because people who back their truck up to the pile right now and fill their half-ton up and take it back to their camp spot would not consume a half-ton full in an evening if they have to pay for it,” continued Bullock.

“I think the big picture underlying question is at what threshold do ratepayers pay for services that are used by majority non-ratepayers?” asked CAO Arlos Crofts.

With a $10 increase for camping at the M.D. park, council inquired if the additional funds covered the shortfall.

“I think that is exactly why we put a $10 additional charge last year as a motion to camping at the M.D. Park to cover that firewood,” stated Coun. John Turcato.

“At this moment, we have had 5,137 nights at the park booked so we made just over $50,000,” replied Bullock, who also touched on the fact COVID-19 played a role early in the camping year. “This spring with COVID, we lost five weeks of the camping season.”

With that increased price, Turcato also asked if campers had raised concerns about it.

“First thing in the spring (park managers) had some pushback but of course it was dealing with COVID and no one knew what the world was doing at that time. The $10 took a back seat with what was going on in the world. They did get some comments but at 15 amp power and the services provided along with that, at $35 an evening it’s still one of the cheaper parks in southern Alberta,” responded Bullock.

A motion to accept the memo as information and to incorporate the costs associated into budget discussions was carried unanimously.

Coun. Leavitt Howg was absent from the meeting.